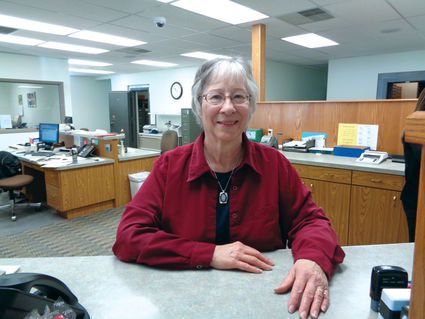 LuAnn Sharbono is retiring from the profession she has loved for 38 years. Inspired by ladies such as June Sullivan and Betty McConnell, she knew in high school that she wanted to be a teller at the bank in Fairview. She attended Montana Tech in Missoula and then returned to Fairview to start her career. Other than seven years off to raise her kids, Sharbono has been welcoming customers with her beautiful smile, and taking care of their needs with courtesy and efficiency. She hadn't planned to return to work as early as she did but the bank asked her to come in "for a day or two," and she has been there ever since.

Bookkeeping was done with a pencil and ledger when Sharbono started at the bank, and all the tellers worked out of one till which was a nightmare to balance and caused some very late nights. Debit cards were unheard of and few, if any, customers had direct deposits or automatic payments, so there were piles of checks and deposits to go through at the end of the day. Everything had to be precise, right to the penny. Computers were just being introduced when she left on maternity leave, and were the norm when she returned.

The bank name has changed several times during Sharbono's tenure, from Fairview Bank to Montana Bank, back to Fairview Bank, then 1st Security Bank West, and now Merchants Bank. Several bank presidents have also come and gone, but she has thrived along with the changes.

Sharbono's favorite part of the job has been the social aspect, both the customers and the people she has worked with. "They're family," she said. "And have made it easy to stay here." She had no "dislikes" saying that "they've been good to me."

Community involvement has always been important to the Fairview native. She taught Sunday School for 10 years and was a leader for both Girl and Boy Scouts. She and Rick, her husband of 45 years, continue to take care of the Fairview Food Bank after over 35 years.

Rick retired from Tri-County Implement in 2016. The couple plans to enjoy retirement and spend more time with their kids: son Daniel and his wife Alyssa; daughter Marci and her husband David Ellingson and especially 18 month old grandson Riley Ellingson, all of Minot.

Vice-president Jan Duda is looking forward to keeping in touch with Sharbono. "We're definitely going to miss her, but she won't be a stranger. She'll keep us posted on how the baby's growing and bring pictures," she said with a smile.

Bank president Neil McWalter commented, "She's a sweetheart. It's always been her ambition to give the best customer service possible. She has been dedicated to taking care of people."

An open house will be held from 1-4 p.m. Friday, March 29 at Merchants Bank. Everyone is invited to stop by for coffee and cake and wish Sharbono well in her retirement.