Young Animals In Spring: If You Care, Please Leave Them There 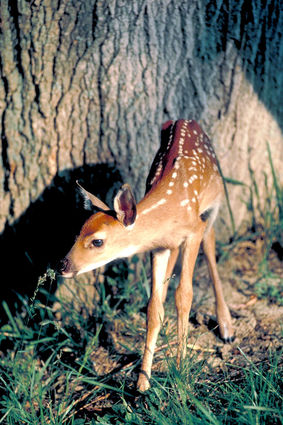 (HELENA) - Each spring, Montana Fish, Wildlife & Parks receives several calls from people who have picked up deer fawns or other wildlife.

FWP advises against this practice for several reasons. The agency does not accept, hold or rehabilitate deer and elk because the animals rarely survive the stress of captivity, and because of concerns with the spread of disease. So FWP's likely response would be to tell people to leave the animals alone or return them to where they were found.

People care for the animals and mean well, but they may not understand that their intervention could possibly kill the animal or cause injury to it or to themselves. Good intentions can lead to dire consequences.

One spring in Miles City, a person saw a fledgling bald eagle hopping around on the ground, which is normal behavior as they learn to fly. Thinking the bird was injured, the person threw a blanket over it and brought it to the FWP office. The eagle escaped and flew in the opposite direction of the nest, and it's not known if it returned.

In a more high-profile case in Yellowstone National Park, a bison calf was picked up and transported by tourists who believed it had been abandoned. The calf ultimately had to be euthanized because it couldn't be reunited with the herd and continued to approach people and vehicles.

If You Care, Leave Them There

To prevent outcomes like this, FWP emphasizes that all wildlife species and their young should be left in the wild. If you see a young animal alone or injured, whether a goose or a grizzly, keep your distance. It is illegal to possess and care for a live animal taken from the wild.

Animals often thrive without our intervention, and their odds of surviving in the wild are much greater if they are left alone. Once people pick up young animals, they usually can't be rehabilitated. People handling wildlife also may injure themselves or the animal, or habituate it to humans, potentially causing problems if the animal is released back into the wild.

It's natural for deer, elk and other animals to leave their young alone for extended periods of time. What appears to be an orphaned animal may not be, but chances are the mother will not return while humans are present. Fawns are seldom orphaned, but if they are, another doe may add them to the group. In 8-10 days, a fawn will have the appropriate gut flora and can survive on its own by nibbling grass. Young fawns have no body odor, which lessens their appeal to predators. Their spots also help to camouflage them while their mothers stash them to feed.

If you take dogs into the field, be sure to keep your dog under control, especially in the spring when newborn wildlife is most vulnerable. Pet owners can be cited and dogs that harass or kill wildlife may by law have to be destroyed.

What FWP Can Do

If an animal truly needs rehabilitation and can be helped, FWP does have a Wildlife Rehabilitation Center in Helena. But an intake policy governs what animals are permitted, and space and staff are limited. Again, because of disease and stress, the center does not accept any ungulates. Should someone bring a deer or elk to FWP, they will be asked to take the animal back to the site where it was found. If the animal can't be returned, it may have to be humanely euthanized.

The center also does not take animals considered rabies vectors, such as raccoons, bats or foxes. Some raptors are accepted, but game species like geese and ducks are not. The center takes orphaned bears and mountain lions, but grizzlies and mountain lions cannot be released into the wild and options are limited.

If you see an injured or solitary young animal in the wild, keep your distance and monitor the animal. If you have questions, you can call FWP Region 7 headquarters at 406-234-0900 or FWP's Wildlife Rehabilitation Center at 406-444-9944. As a wildlife agency, FWP's priority is to keep wild animals /wild/, and we urge the public to help us in this mission.