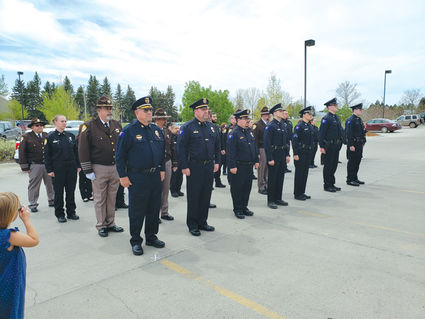 Members of the Sidney Police Department and Richland County Sheriff's Office assemble to show their respect for the individuals and their families who have lost their lives in the line of duty.

Local law enforcement gathered on Wednesday, May 15, to remember their fallen members and salute those who serve. Following the honor guard posting of the colors and formation by the Sidney Police officers , the Richland County Sheriff's Officers and support staff, Captain Mark Kraft explained the origins of the memorial event and gave some statistics.

In 1962, President John F. Kennedy signed a proclamation designating May 15 as Peace Officers Memorial Day and the week in which that date falls as Police Week.

Nationwide, 21,500 law enforcement officers have died from various causes since 1791 when record keeping began, with 40 so far this year. In Montana, 129 officers have been lost. 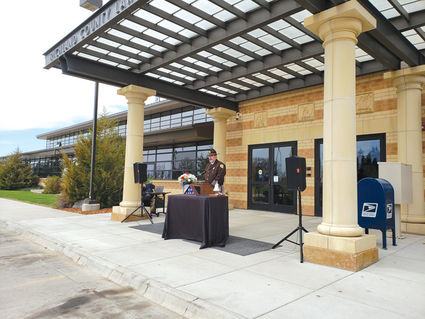 Richland County Sheriff John Dynneson recognized the two officers who ended their watch in the line of duty in Richland County: Sheriff's Deputy George Eikhoff who was killed in an automobile accident in 1962 while transporting someone to the hospital; and Fairview Police Chief Orville Sharbono who was killed while serving a warrant. He said the purpose of the service was to show utmost respect to those individuals and their families.

The bell was tolled seven times, the first six for those who have responded, served, protected, sacrificed and suffered. The seventh signaled the loss of life.

"Taps" and "Amazing Grace" by bagpipers concluded the moving ceremony.