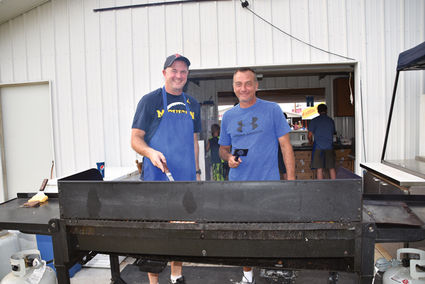 The Richland County Baseball players are looking forward to another successful year of fundraising at the Richland County Fair. Serving food and drinks at the Baseball Food Booth has been one of their major fundraisers for many years. "This booth really helps us get ready for the next season, and it is all made possible because of volunteers and people in the community that buy from our booth," said League President, Travis Bower.

The baseball booth's primary purpose is to fundraise as much money as possible so that Richland County baseball players will have enough funding to participate in the upcoming season. Bower added, "Our main goal is league fundraising, but people think highly of our booth, so food quality, service, and cost are also very important to us!"

When Bower was asked what makes their booth stand out from the rest, he responded, "people come for the baseball burger, but they also come because our lines tend to move faster, our food prices are on the lower end as far as fair food goes, and our quality of food is high!"

The Richland County baseball has had a very successful 12U program, despite not having American Legion and Babe Ruth baseball program. According to Bower, the successful program was made possible by people and parents that have volunteered their time to the league. "I'd like to thank the people that I have on my board for helping the league take the first few steps toward major improvements to grow the program. We owe a huge thank you to all the local businesses that supported the league by sponsoring teams, donating equipment, and reducing their costs to make them affordable for the league. Lastly, I'd want to thank the City of Sidney for all their efforts this year. They stepped in on several occasions and helped us out with little notice, and that helped make things run a little smoother," explained Bower.

Come out to the Richland County Fair and enjoy some of the food the Baseball Booth has to offer! You will be supporting the local baseball team as well as enjoying some great food!