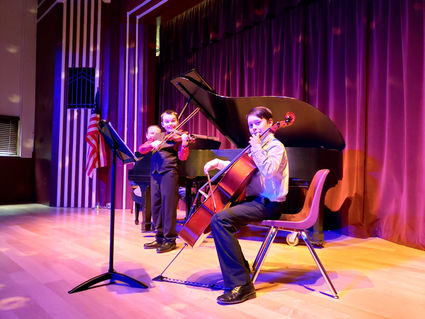 The Middle School auditorium in Sidney rang with music and song Sunday, October 27 as Emmaus House held its annual fundraiser to support their mission and Vision of Hope, which provides scholarships to high school students and young adults diagnosed with Autism Spectrum Disorder.

Performers for the event were internationally renowned opera star and musician Christopher Bengochea on the piano, nine year old Felixe Becker on the violin and 11 year old Jean Elazar Bengochea on the cello. Christopher is originally from the Charley Creek area and now lives with his family, including Elazar, in California where he is a resident artist of Opera San Jose. Elazar began studying the cello at the age of three and has won many accolades. He is also a member of the "Crazy Cello Kids," a trio of best friends that plays for parties, concerts, churches and other events. Felixe lives on the family farm in northwestern Richland County and belongs to St. Bernard's Catholic Church in Charley Creek. He has earned high honors in competitions over the last year and performed in "Peter Pan" at the Fort Peck Theatre this summer.