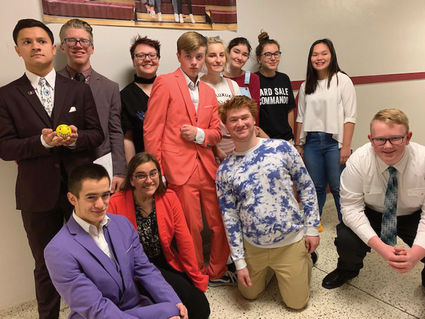 Speech, Drama & Debate travelled to Poplar this past weekend, coming home victorious. Twelve competitors loaded the bus at 6:30 a.m. tired and not sure which end was up, some of the kids used the bus time to go over the piece that they were going to use in the competition, others slept, but there were a few, who like myself stopped and got coffee before loading up on the bus so we were awake and ready to pump the team up. The meet was small but competitive, especially since it was only the second meet of the season. Since the meet was small Public Forum Debate and Extemporaneous speaking were not offered, so three of our competitors had to find different events to compete in. Sam Stephenson who usually competes in Public Forum placed 4th and Lorraine Coronato placed 1st in Lincoln Douglas Debate.  Brandon Smith usually competes in Public Forum but placed 2nd and Colten Dahl usually competes in Extemporaneous Speaking but placed 5th in Impromptu Speaking. Chloe Go placed 1st in Informative Speaking, bringing home the 1st place Trophy for Speech & Debate!!