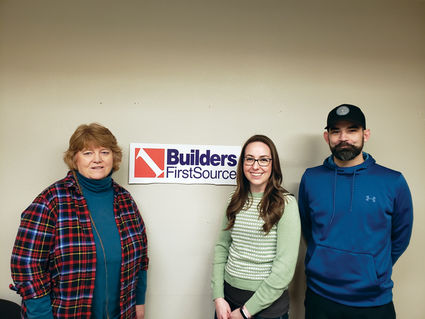 Sidney women are making inroads in the male dominated world of the lumber business, starting with the promotion of Teresa Mannix to store manager of UBC – ProBuild in 2006 when she was one of only two female managers out of 400 nationwide. Now, Katey Bayless is continuing that trend with her promotion to assistant manager of the Sidney store.

Bayless joined Builders FirstSource in 2014 as assistant to the office coordinator. After just six months she transferred to that position as well as keeping her former duties. She has handled accounts receivable, accounts payable and managed the office to keep it functioning as a whole.

General manager Mike Rogers first approached her about the assistant manager position almost a year ago when her initial reaction was No. However, the idea started to grow on her and she finally accepted the job. She has been doing on-line training within the company to help fulfill her new duties. A lot of those duties are in line with what she has already been doing but now she is working into ordering inventory, building the budget, managing reports and making sure the facility functions as a whole. She said that a good thing about the company is that they are willing to promote within since there are many retirements coming in the near future, leaving room for new, younger people to step up. "Five years ago when I started this job, I didn't expect this promotion," she said.

Mannix said she is incredibly proud of Bayless. "I watched her from her first interview and saw her confidence bloom. There have been a lot of changes in five years. I almost think this promotion is more rewarding to me than Katey. It's great to be in her life." It was definitely a challenge for Mannix when she became store manager but she was determined not to be defeated. She says Bayless is the same way. The two women worked closely together until Mannix retired a year ago. "She's my mentor," Bayless said of Mannix.

Store manager Mike Rogers is also proud of Bayless and appreciates her dedication to the customers and the company. "I couldn't be happier," he said. "Mike and I work well together and compliment each other," Bayless commented.

He knows it's tough for women in the lumber business but things are gradually changing. There were 10 females at the most recent managers meeting. With women entering the work force two to one compared to men, he said companies have to move forward. He added that Builders FirstSource is always looking for quality people.

Bayless is a Sidney native, the daughter of Gordy and Kelly Rau. She graduated from Sidney High School and worked at the Richland Motor Inn for a year before attending the College of Technology in Helena where she graduated with an associates degree in office administration in 2007. After working as a receptionist for a pediatric clinic in Helena for seven years, she returned to Sidney. She is married to Zach and has a daughter Clementyne.