Out With The Old In With The New 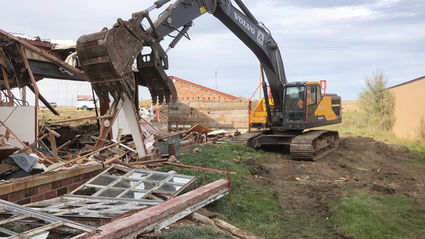 The Lewis and Clark Trail Museum will be implementing a project, starting this spring. The finished project will give visitors an insight into the type of crops that would have been planted around Alexander when the town was first established.

The idea to start this project was a joint effort between the Williston Research Extension Center staff, the museum board, and the Natural Resources Conservation Service staff.

On the Lewis and Clark Trail Museum grounds, there will be a kiosk containing information on crops that will be planted, which would be durum, spring wheat, barley, oats, canola, peas, lentil, soybean, flax, corn, and sunflower. Natural Resources Conservation Service staff and Cameron Wahlstrom and Meredith Miller (staff at the Williston Research Extension Center) will help plant and harvest the crops.

"The intended purpose is to have demonstration strips that will give museum visitors a visual representation of crops typically grown in North Dakota. There is a large disconnect between people not involved in agriculture and farmers who are currently producing the products we enjoy. The purpose of this project is to show people what their favorite food products look like in the field, and before they are processed," explained Justin Jacobs, an Irrigation Research Specialist at the WREC who is helping plan the project.

Cathy White, the Lewis and Clark Trail Museum Director, said, "Our goal is to encourage visitors to visit the outside of the museum and look at some of the old farm equipment that will be outside as well. We want to give visitors and people who are new to North Dakota the opportunity to see what type of crops we grow here and to also learn a little bit about them."

White also explained that there would be a cover crop and possibly some trees added to the grassy area outside of the museum. "We were also thinking about possibly putting a bench on the outside area and dedicating it to Alf R. Flaten, who was the Superintendent of the Alexander School in the early days," added White.

The crops will be planted where the Lewis and Clark Trail Museum's Alexander School gymnasium was located. The gymnasium, attached to the original 1914 three-story schoolhouse, was recently taken down due to continuous water issues. These water issues were caused due to the gymnasium being built underground. The gymnasium was built four feet below ground level, the locker rooms were located eight feet below ground level, and the boilers in the boys locker room were placed an additional two feet lower than that, which contributed to all the water damage the building experienced.

Many people who attended community and school events at the gymnasium called the structure a "state of the art building in its day." Even though the building held a lot of sentimental value for many people - everyone is excited to see an agricultural education area put in place of where it used to stand.