Help Fly The Flags in Fairview 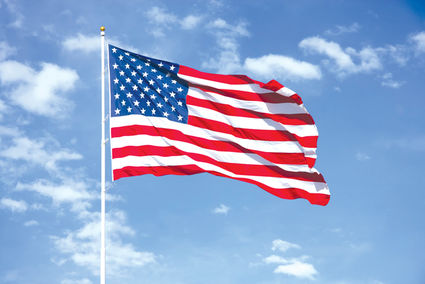 The American flag, that iconic symbol of patriotism, is flying once again on Ellery Avenue in Fairview thanks to Mayor Brian Bieber. The flags were up for about a year before being replaced by Christmas decorations, and will go back up once the weather improves. "They add to the look of Main Street. I think they're a nice touch and the community seems to support it," Bieber said of his efforts. The first batch of flags came through Eddie Simmons of the American Legion, brackets were crafted by Brent Kohlman and Bieber has put up the flags, all at no taxpayer expense.

Because that first batch of flags is now fraying due to our severe weather conditions, particularly wind, The Fairview Chamber of Commerce is spearheading a fundraiser to replace all 14 flags. One flag costs $25. Anyone who would like to make a tax deductible donation towards the purchase of a flag may drop it off at Merchants Bank in Fairview or mail a check payable to Friends of the Fairview Bridge, Box 374, Fairview, MT 59221.