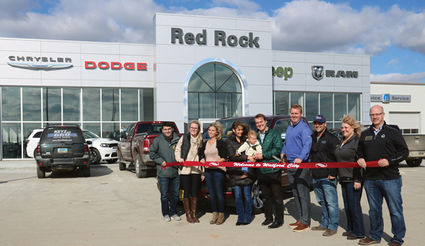 Members of the Watford City Chamber helped celebrate the Grand Opening of Red Rock Auto by cutting the ribbon on Friday, Oct. 11.  Lunch and door prizes were given out throughout the day as patrons ventured out to see the new dealership in town. Pictured from left, Bobby Kaloustain, Celina Monsen, Patty Wolff, Oriana, Benjamin and Adam Nelson, Alex Nelson, Luke Taylor, Diana Pokrzywinski and Pat Bertagnolli. (Photo by Kathy Taylor)

Red Rock Auto, located on 1212 4th Ave. NE in Watford City, opened up in August 2019. Red Rock Auto is a full-service dealership that sells new Chrysler, Dodge, Jeep, and Ram model vehicles along with other used vehicles and a full service and parts department that contains a vast selection of parts.

Red Rock Auto has been a family-owned dealer group since the early 1990s. "My parents, Brent and Laurel Nelson started a dealership in Minnesota in the early 1990s. My brother Alex and I moved to Western North Dakota in 2016. We purchased a dealership in Williston in 2016 and Dickinson in 2017 and now Watford City," explained Adam Nelson, Red Rock Auto's Dealer Principal and General Manager in Watford City.

Adam explained that Red Rock Auto has been very successful since it has opened in August. "We have been really busy! Since we have opened, our service department has been running at capacity and the sales side of it has really been going well," stated Adam.

Red Rock Auto strives to deliver excellent customer service to all of its customers. They want to ensure that everyone has an enjoyable and positive experience when they visit Red Rock Auto, whether it's to buy or service a vehicle -they take great pride and demonstrate it by offering the highest levels of customer service.

Red Rock Auto's expert team of professionals are always available to answer any Chrysler, Dodge, Jeep, and Ram questions you might have. For more information on vehicles and services they offer, stop by today or give them a call at 701-842-4070.