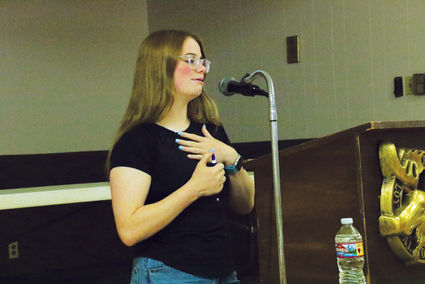 Jade Henning thanks the Moose for its support (photos by Bill Vander Weele).

The Sidney Loyal Order of the Moose and Women of the Moose held its birthday celebration and legacy ceremony during a program on Saturday night, June 27.

The Loyal Order of the Moose honored Kenneth Bailey with the Moose of the Year award. Nominated for the Lifetime Achievement Award was Mark Delaney.

Anna Nistler was the recipient of the Women of the Moose's Co-Worker of the Year honor. Dorothy Fink was the winner of the Lifetime Achievement Award. 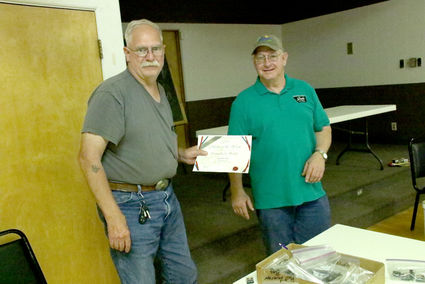 Moose of the Year Kenneth Bailey, left, receives his award from Dean Rehbein.

The night also featured the graduation party for Jade Henning. She was sponsored by the Sidney Lodge to live at Mooseheart in Illinois for the last four years.

Mooseheart is a residential and educational childcare facility that aims to give children second chances and brighter futures. Since its founding in 1913, thousands of children have experienced the stable and caring learning environment of Mooseheart.

Jade thanked the Moose for its support. She is enlisting in the Air Force National Guard and plans to go into law enforcement.