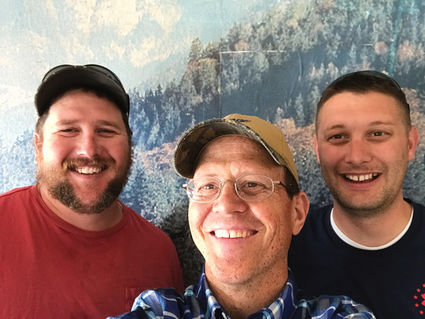 Frontier Tires & Glass, Sidney, is now open for business. The new owners are Bryce Dinkelman, Brandon Batty and Joseph Knapp. The shop is located south of Sidney on HWY 16, 2650 South Central Ave. Their hours of business are Monday-Friday, 7 am-6 pm, Saturday from 7 am-2 pm.

The three men began life each individually in the rural communities of America. They were raised on the principles that all men and women were endowed by their creator with certain inalienable rights including the God given right to life, liberty, and the pursuit of happiness.

Their lives were vastly different. Each one eventually found themselves working in the Bakken Shale. Each one has come to love the Bakken area. This land for them is truly the frontier. It is open and free, harsh and vast, ever changing, full of adventure and opportunity. Each of these men has re-located their families here and have now made this home. After Covid-19 rocked the oilfield and the economy this team of three began to look for an opportunity in the area that could fill a need.

Bryce, loyal and efficient, started in the oilfield in 2007 driving truck and mechanical work, he eventually made his way to the Bakken and then was recruited by an oil firm to Colorado to run the maintenance program in Colorado, North Dakota, Pennsylvania and Texas. Later Bryce started his own mechanic company called WB Automotive which did oil changes, brakes, struts, wiring, DOT inspections as well as owning his own trucking company.

Brandon is a fun and hardworking man who started a roustabout company when the federal government was drilling hot and heavy in the Vernal, UT and Dinosaur Colorado fields. When the U.S. presidency had an administration change with the election of 2008, drilling was nearly stopped on all federal lands. Brandon needed a new Frontier to work in.

Joseph is a man of integrity and loves people. In his career his focus has been building relationships with people. He originally came to the Bakken to operate locomotives in Trenton, and has worked since then in the oilfield in trucking and trains. In May, Joseph was fortunate to enter into business with Bryce and Brandon.

This Eastern Montana, Western North Dakota oil patch was full of opportunity because of 3 things. First: the existing BNSF railroad that was still in service from the Great Northern Railway system. This railroad is still in service because of the amazing commitment to agriculture that exists in Minnesota, North Dakota, Montana, Idaho and Washington state. This railroad gave the ability to get Bakken oil to the market by railcar. Second: the advanced technology from directional drilling. This allowed the driller to draw much more petroleum out of the ground at lower cost and with a much smaller environmental impact. Third: private property ownership. With the land up here held in the hands of private farmers, families, and businesses, the free market system was able to work. When supply and demand dictate the market price and the government's role is to protect individual rights, Americanism can flourish. It's not perfect but it has been a more perfect union since 1776 than centuries of previous civilizations.

Bryce, Brandon and Joseph were all beneficiaries of these 3 ingredients that made the 2010-2014 boom. Brandon who is the founder of Triple B roustabout services, initially hoped to make a good start here. Brandon has come to love Richland, Roosevelt, Dawson, McKenzie and Williams counties and did not want to leave. After the oil bust from Covid-19 Brandon began to look for other opportunities to diversify his services to help hedge the boom and bust cycles.

Bryce & Joseph decided that the need was here for an additional tire, glass and light maintenance facility and began looking for property. They called on Brandon Batty as an experienced businessman and friend to get some advice. The idea excited Brandon as he had previously contemplated the idea of an adding a tire store to Triple B Roustabout Services. At the first business meeting they included auto glass as an additional service.

The idea was here, the opportunity was here, the personnel was here. Now where to do the business? Brandon suggested they look at the old McJunkin Redman building on the southside of Sidney next to Amunrud's RVs. there sits a 5-acre lot with 2 shops. The short-topped older shop has a long front porch and looks like a building you might see on the old frontier where a trapper might trade fur and buy supplies for the up-coming winter. The site is a perfect location for a tire & windshield shop, plenty of room for cars, trucks and semis.

The original building was designed and built by John Zaback in 1980 when he had a dream to build a motorcycle facility to service the area. John named the company M & R Cycles after his sons Mike and Rodney. John ran the business with the help of his family and friends. John passed away in 1998 while vacationing in Arizona. The business was bought out and the parts and assets were sent to Williston.

The building was then purchased by an investment company who added a very large shop and improved some additional acreage for storage and it was leased to McJunkin Redman MRC, an oilfield supply company. MRC was acquired and the inventory again was sent to Williston. The building sat vacant from 2015 until July 2020 when Bryce, Brandon and Joseph began clean-up and moderate renovation.

The building is now being used again to service the people, families and businesses of the MonDak.

The name Frontier Tires & Glass was affectionately chosen as a tribute to the past. President Thomas Jefferson commissioned Lewis & Clark who headed the Corps of Discovery; pioneers and immigrants came here looking for an opportunity and a better life; and the frontier of future generations that can still believe, dream and build on our history.

Congratulations to three God believing, hard working gentlemen. Your great work ethic and common sense in business will take you far! Thank you for starting this business and continuing the American dream.... it does still exist... you just have to work at it and you three are a great testimony to that! God bless you and your business!!

Congrats in order for the three of you. Brandon is an honest, understanding and hard working man. I had the honor of being employed by him while living in Sidney years ago. If y’all ever need anything from Louisiana let me know and I’ll do what I can to help. My family and I have been blessed to have been acquainted with Brandon and his family. Thanks for the memories!