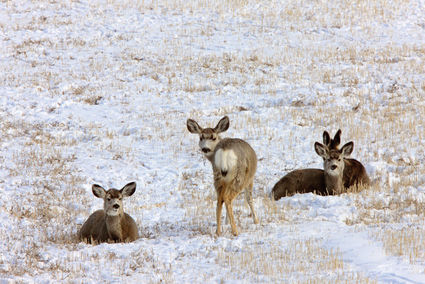 I was 41 years old the first time I went hunting. I grew up on the central coast of California. Hunting wasn't an integral part of life, nor was it a frequent topic of conversation around the supper table. Other than the occasional, stray comment about killing Bambi, hunting just wasn't on our minds. Don't judge me. When I was allowed to choose where I wanted to live, I ended up in eastern Montana. Not bad for a first choice.

When I first expressed curiosity about hunting, the most common suggestion was to take a Hunter's Safety Course. Never having fired anything larger than a BB gun, the information in this course was invaluable to me and definitely saved the life of my hunting partner.

My classmates ranged in age from 12-16 years old, with one lone young man in his 20s. One little boy expressed concern that I might be too old for the class. There was a hesitancy before class began, quickly explained when the instructor asked me when my child would be joining us.

During the course, I learned how to properly handle a rifle, including how to carry one when walking with others and identifying when it was safe to shoot. I learned the different parts of a rifle, how to determine which bullet belonged to a specific rifle, how to safely load and unload a rifle, where to aim for a quick and humane kill and most importantly, where to find the safety.

I found a friend willing to teach me to shoot his rifle. The only prerequisite besides the Hunter Safety Course was that he would not take me hunting until I hit the bullseye three times in a row. After plenty of practice, I accomplished the task and it was time to go on my first hunt.

On a cool November day, we quietly made our way to a promising spot and settled down to wait. It wasn't long before I spotted a small buck working his way down a shallow coulee. Until this point, I had never considered whether or not I would be able to pull the trigger. I lifted the 30-06 to my shoulder, lined up the crosshairs on a spot just behind and a bit down from the shoulder, took a deep breath, let it out and slowly squeezed the trigger, just as I'd been taught. The buck took a couple of steps, which caused me a moment of panic, and dropped. My first hunting trip was a success.

Here is my recipe for the first deer I ever harvested: 4 deer steaks, juice of 2 lemons, juice of 1 lime, ½ onion, thinly sliced, a quarter cup soy sauce or 1 tablespoon of salt. I like things a little spicy so I put 2 teaspoons of hot pepper flakes in the mix. Feel free to leave it out. Put everything in a covered container and allow to marinate for 24 hours. Grill or fry. Enjoy.