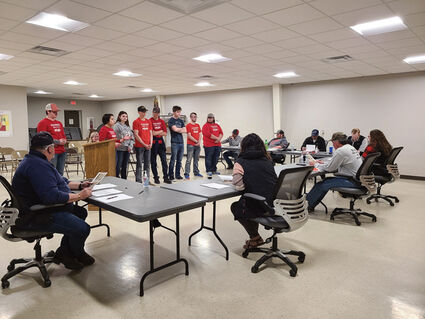 The Alexander Robotics team is busy perfecting their robot for an upcoming competition. The regional contest will be held this week and the team is hoping for a big win. If they advance from regionals, they will have a chance to compete in the North Dakota state competition in May.

"The students are busy preparing for regionals and in addition to things that they've done in the past like our everyday building and design processing, we've hosted two scrimmages at the school and welcomed other robotics teams," said Cathy White, Alexander Robotics Team mentor/coach.

Due to COVID-19, the robotics season has been extended, which allows the team members more time to build and perfect their robots and put on community events like Turkey and Easter Bingo.

The team is currently working on an innovation project. FIRST (For Inspiration and Recognition of Science and Technology) offered an additional project this year called the innovation project. This project is where students develop a plan to increase the mental and physical health of the community members.

For this project, the members put together a plan for building a full-sized basketball court in Alexander.

"We do have a basketball court at the school but it's not regulation and the kids would say the hoops are horrible. So they're looking at applying for a grant and trying to figure out where they could place a basketball court. We've done surveys with community members and have been to the City Park board a couple of times and will be attending the City Council meeting to talk to them about it," added White.

In addition to this, the team is sponsoring a rookie team from Eswatini, South Africa. They helped them start their new team of five students by supplying their registration fee, and kit expenses.

"We have had the opportunity to work remotely with the team via zoom monthly. It has been a great experience for the teams to work together and learn from each other," stated White.

The team is also looking at going to Washington DC again this summer to advocate for STEM and robotics. They are planning on meeting with congressmen and senators to share information on the importance of STEM. 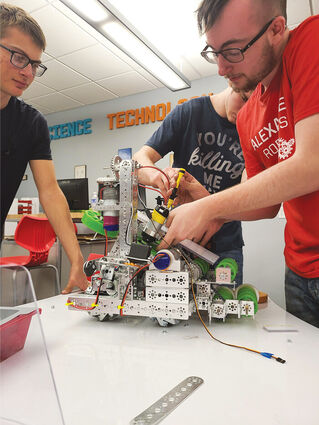 Thomas Overturf, Lane Rider and Austin Collins (all juniors) adjusting the intake and shooting mechanism on the robot. (Submitted photo)

"My goal this year was to help the team make it to World's again, and to prepare the juniors for next year," said Drew LeBrun, Robotics Operations Department Manager.

White said, "It's been difficult because at times some of the team was in quarantine and we've had to work with distance learning. We were able to do some of the computer-aided drafting and drawing at home and come up with other additional ideas when they were in quarantine. It definitely was a challenge, to begin with, but now with our numbers in the state as low as they are, we are able to continue at normal capacity with social distancing."

To see what the team has been up to, check out their Facebook page: Alexander Comets FTC Team #9963.