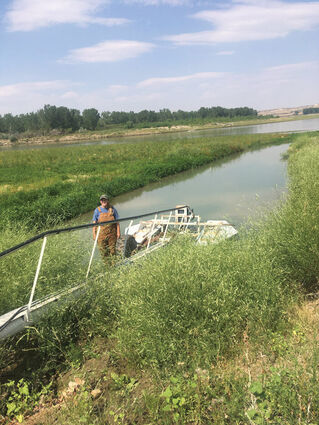 The picture is of a pump site that will not be usable after the high flows. (Submitted photo)

In an effort to see if the endangered pallid sturgeon can successfully spawn in the wild, the U.S. Army Corps of Engineers (Omaha District) will be executing an experiment that involves fluctuating dam releases of Fort Peck Dam between April and July 2023.

This is purely experimental, and the Corps is uncertain whether or not the sturgeon will successfully spawn immediately, this will all be dependent on several variables.

Although, the reproduction of the fish in hatcheries has been very successful in increasing the numbers of upper Missouri River basin pallid sturgeon, the Corps would like to see natural reproduction of the fish. This is because if only a small amount of wild pallid sturgeon contributed to large numbers of offspring for both the captive Broodstock Program and the wild stockings, the next generation of upper Missouri River pallid sturgeon could possibly have reduced evolutionary potential and little genetic variation.

An estimated 160 pumps, located near Fort Peck Dam, provide irrigation for 70,000 acres of cropland between Richland, Roosevelt, McCone, and Valley counties in addition to Fort Peck Tribes. Conducting this release several times in a few years would be a burden to several farming operations. The target flows are too high, the drifting flow is too low and the flow release of change from high to low occurs too rapidly. The impacts to both the mainstream and the side channel will deter crop production due to untimely irrigation.

In addition to this, there are several issues with farmers obtaining crop insurance on their affected crops - due to this type of damage being caused by a man-made occurrence such as this.

The area communities also depend heavily on the increased tax base irrigated land provides to their local economies.

Hearing the negative impact this will have on the region, Montana's U.S. Sen. Steve Daines sent a letter to the Corps in May, requesting them to extend the Draft Environmental Impact Statement comment period, provide for more public meetings, and closely coordinate with state agencies before proceeding. In his letter, he stated, "Over 100 irrigators remain affected along the Missouri River Corridor will be impacted by this project and there remains unanswered questions and concerns among the community."

The Fort Peck Tribes also expressed opposition to the experiment. Stating in a letter to the Corps, "While the tribes support the restoration of the pallid sturgeon, Tribes are concerned about how the proposed actions will affect the Fort Peck Reservation's boundaries, water rights, tribal water supply, and irrigation systems, and tribal inclusion in the planning process."

Fort Peck tribes have about 80 employees that work for Sidney Sugars Inc., a company that will be heavily impacted by the test flows. Dave Garland, Sidney Sugars General Manager said, "Approximately 22% of our contracted acres will be directly affected by these test flows. With this loss, the potential to close the plant is real."

For Sidney Sugars, a loss of 22% of its contracted acres would amount to $25 million per year in loss of revenue. The loss of the factory would impact the community greatly. "It would be devastating to the entire region," added Garland.

Several groups have been speaking out against the test flows ever since the plan was announced; participating in meetings, coordinating irrigation pump site surveys, working directly with the corps to answer questions. After all of this, people opposed to the experiment seem to have not gained much momentum.

Dick Iversen, Missouri River Conservation Districts Council member said, "We feel fairly discouraged. We went through all of this work, and they basically did not change anything. They are going ahead and doing something that will potentially break a lot of farmers, ruin the sugar industry, and affect the employment of the tribes."

Matt Stedman, a farmer from the Culbertson/Brockton area said, "We have been fighting that battle and doing polls and stuff with them for the last year. We have a voice and did what we could do and I don't know where to go from there."