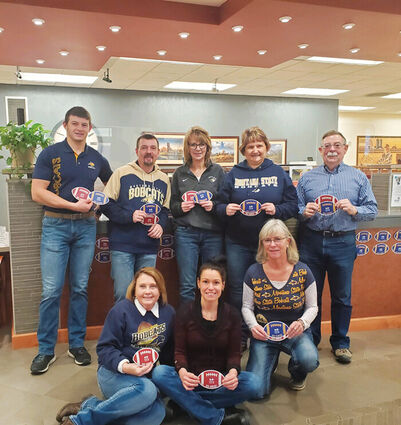 "The contests are well received by our staff and members, and we can have some fun raising money for organizations. We joined other credit unions in our state 5 years ago to support Shodair Children's Hospital in Helena," said Kevin Mayer, Richland Federal Credit Union CEO.

These contests are a part of Montana's Credit Unions (MCU) successful relaunch of their Credit Unions for Kids (CU4Kids) efforts benefiting Shodair Children's Hospital. Employees at Shodair Children's Hospital and 28 Montana credit unions participated in selling one-dollar team icons to football fans that supported their team when visiting credit union lobbies. Credit unions from around the state raised over $25,000 from the MCU's inaugural Cats vs. Griz Icon Fundraiser.

The fundraising does not stop there; MCUs are committed to donating $50,000 to the local hospital in the coming years.

The Richland Federal Credit Union knows that the funds raised not only support Montana but also children in Richland and Roosevelt Counties.

"We believe this is a direct benefit to our communities that we serve as in 2020 nine children in Richland County and 17 children in Roosevelt County received treatment at Shodairs," Mayer said.

"An essential part of Richland Federal Credit Union's philosophy is giving back to our community either through charity or volunteering."

The Richland Federal Credit Union plans to continue their mission of supporting non-profits and helping the community.

"Our motto has always been "People Helping People" and we will continue to support the various non-profit groups within our communities."