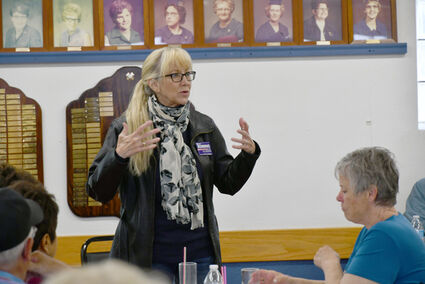 The Montana Eastern District Democratic US House Candidate Forum was held May 19 at the VFW in Sidney. Democratic candidates for the US House of Representatives Penny Ronning and Skylar Williams were in attendance to discuss their platforms and take questions from voters. Unfortunately, Democratic candidate Mark Sweeney passed away on May 6.

Penny Ronning was born in South Dakota to parents with strong agricultural backgrounds. In the 1970s her father purchased a restaurant in Billings. She previously served on the Billings City Council. A post she has held for the past four years. During her time there she has prided herself on being able to cross the aisle to get things done. On the Billings City Council, Ronning has also worked extensively on public safety, energy cost savings, mental health and substance abuse among many other issues.

Ronning has positioned herself as a centrist candidate. Through her work on the Billings City Council and other committees she has worked with Republicans to get real results.

Skylar Williams was born in Havre and lived on the Rocky Boy Reservation until he moved to Billings around the age of five. Williams had a tough childhood without a real family unit. He was homeless at a young age and left school in the 7th grade. With the help of guardian families he was able to learn his life skills and attended the Job Corp Program in Anaconda. During his time in the Job Corp he learned about the foundations of our government and how programs can help people. As he grew older he learned more about the tribes of Montana and his heritage. He now seeks to represent the Tribal Nations and Montana in the United States Federal Government.

Williams' main focus of his campaign is Medicare for all, free college tuition and climate change.

The candidates fielded many questions from the voters in attendance. They covered energy generation, climate change, mental health and enhancing the life of residents to name just a few.

On the topic of election laws, both candidates were in agreement that the more restrictive laws are meant to suppress voter turnout. They feel the same day voter registration, voter ID restrictions and not being able to use a post office box if you do not get mail at a home address is a direct attack on the voting rights of Native Americans.

One of the questions asked was about the polar vortex that wiped out power in Texas in 2021 and the limitations of solar and wind generation.

Williams stated that it wasn't the solar and wind that failed but the power companies themselves. The Texas power companies have put profits over people and not building resiliency into the grid.

Ronning stated that whenever man builds something in nature there are going to be human errors. She feels the experience is an opportunity to learn how to better the system.

The candidates were also asked how they would enhance the life experience of Montana citizens. Williams thinks one of the best ideas would be to build a high speed bullet train. The train would connect the major cites in the Rockies, upper Midwest and Pacific Northwest. It could carry both passengers and freight in a fraction of the time as traditional railroad and highways. Ronning feels the best way to enhance life for Montanans is to ensure rural communities and farms and ranches continue into the future. She feels agriculture is the heart of the state and our farmers feed the nation. They are stewards of the land and answer to consumers.

Another important topic discussed was the lack of mental health resources. Williams feels Medicare for all would help alleviate this problem. He feels when the state falls short, it's the role of the federal government to step in. He also feels Republicans do not think it is an issue or they wouldn't have defunded the state mental hospital. 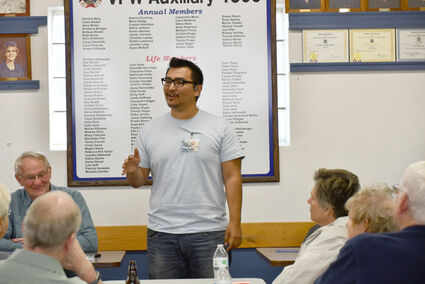 Ronning feels it's the job of the government to meet the needs of the people. She feels the policy is failing the people and is playing out in the local community. "Cutting services is not cutting spending," she stated. Ronning is also against the decision to take away the requirements for school counselors.She feels it will lead to more violence in schools and not equip students to deal with their emotions calmly. Ronning would like to see better telemedicine for rural communities and feels the Medicare reimbursement age should be lowered.

Democrats Ronning and Williams will be on the ballot during the Montana primary on June 7. Running on the Republican side for the MT Second Congressional District for the US House of Representatives will be incumbent Matt Rosendale, Kyle Austin, James Boyette and Charles Walking Child. Libertarians are Sam Rankin, Roger Roots and Samuel Thomas. Gary Buchanan is running as an independent.