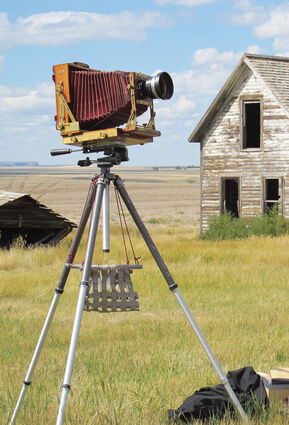 The settlers who advanced upon the northern high plains struggled to establish homesteads in the late 19th and early 20th centuries. The lure of owning land at minimal cost - but at great labor - was forcefully enticing. In the face of formidable odds against them, including drought, wind, cold, remoteness, and primitive tools, these determined people established homes, plated fields and gardens, and raised livestock.

Climatic conditions and economic forces often conspired against them. Many persevered, and many sold out and moved on.

"As a former resident of Montana's Judith Basin, I have long admired these stalwart people. Recently I have returned with my 8x10" view camera to record their rapidly diminishing remnants. Their abandoned structures and rusting machinery, set against the immensity of sky and land, evoke in me a profound respect for their courage and resiliency. May these images honor their frontier spirit." Lee Silliman.

This exhibit consists of black & white contact print photographs taken by Lee Silliman with his 8 x 10 inch view camera over six years in central Montana. The exhibit presents views of long abandoned homestead dwellings, aging barns, old machinery like combines, tractors and road graders, school buildings, horse collars and tack still hanging in sheds, vintage trucks, wooden grain wagons, and old grain elevators. These photographs were taken thanks to many private land owners who gave permission to record homesteading era remnants on their property. The exhibit is complemented with quotation panels which relate the historical context of the times.

The photographer, a retired secondary level school teacher and museum archivist, lives in Missoula, where he indulges in his penchant for exhibiting not only his photography, but also collections of 19th century engravings relating to the history of the American West. His shows have garnered more than 100 venues in ten states since 1988.

The MonDak Heritage Center is funded in part by coal severance taxes paid based upon coal mined in Montana and deposited in Montana's cultural and aesthetic projects trust fund.

The MonDak Heritage Center is open Tuesday-Friday from 10 a.m.-4 p.m. and Saturday from 1-4 p.m. Admission is free. For more information call 406-433-3500 or e-mail [email protected] Visit us online at http://www.mondakheritagecenter.org.