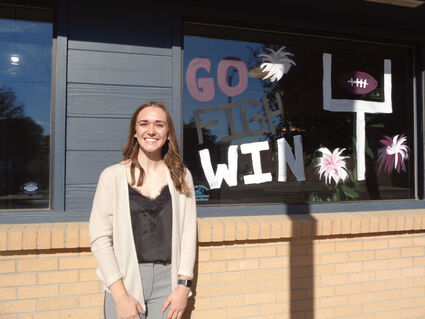 Sidney High School graduate, Breanna Frank, has already been to Girl's State and the Merchant Marine Academy in just four short years. In December she will be off to start a commission with the Coast Guard. (Photo by Jaymi Mozeak)

A Sidney high school graduate did something almost unheard of in eastern Montana. On June 18, Breanna Frank graduated from the United States Merchant Marine Academy in Kings Point, NY.

Frank wanted to be a pilot after graduating high school in 2018. Her mother who owns Esprit Health Clinic and one of her mother's colleagues suggested Frank attend Girl's State, a weeklong camp for young women. After attending the camp, she applied to the United States Air Force Academy. The academy is extremely selective, according to http://www.prepscholar.com, with only 11 out of every 100 making it in and she was one of the many not chosen to attend. It was suggested to her that she try the Merchant Marine Academy. While attending the academy she not only learned in classrooms and labs, but she also spent over 300 days at sea twice on commercial ships over the summer to learn the basics of sailing. Four years later, in June, 2022, Frank graduated with a Bachelor of Science in maritime logistics and security. She was not done yet, however. 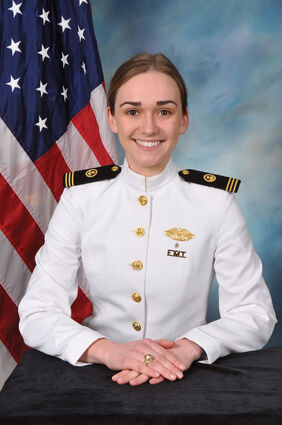 Breanna Frank graduated on June 18, 2022 with a Bachelor of Science in Maritime Logistics & Security and has since accepted an offer to commission into the U.S. Coast Guard as an Ensign on Dec. 1, 2022. (Photo by Island Photography)

After graduation, students from the academy are to attend commission for a minimum of five more years before fully graduating. Frank applied to join the Naval Reserve, but she was to start right after graduation and received an injury that prevented her from leaving at that time. She found out that she could join the Coast Guard later in the year with the skills she had just learned and applied to be a Marine Inspector with them. She got the position and will start her commission on Dec. 1. She will start as an ensign and then be able to advance as time goes on. Each tour with the Coast Guard will be two to three years at sea on either the West or Gulf Coast. After Frank's first tour she could be offered a spot in Flight School.