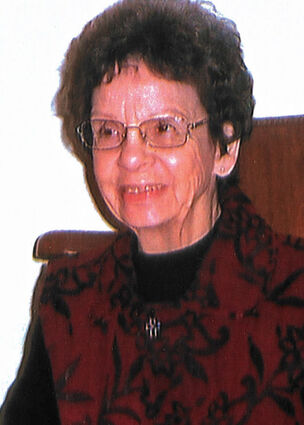 Rose Marie Gamache was born in Alexander, North Dakota on December 8, 1930. Her parents were James Arthur and Sarah Irene McCarten of French, Irish and Norwegian decent. Rose grew up on her parent's cattle ranch on the Fort Berthold Indian Reservation with her three sisters, Thelma, Betty and Marjorie. She came from humble beginnings and strong family values which she carried with her throughout her life. Her childhood home had a dirt floor with throw rugs and she had to fetch water from the well. Rose was a quiet and shy girl. She attended school in Watford City and one day in the 7th grade while sitting by herself with her head down a boy took notice of her. At the time he thought to himself, I am going to go talk to that girl and be her friend. That boy was Larry Gamache and the beginning of a lifelong friendship that lasted through out their seventy-one years of marriage. Rose and Larry were high school sweethearts and joined the band together, Rose played the trumpet and Larry was the leader on the band and played the drums. After graduating from high school, Rose attended the NY Hairdressing School in Fargo and completed her training in Dickinson, North Dakota. She maintained her beautician's license well into her 80's.

Rose married Larry on September 15, 1951 in Watford City, North Dakota while Larry was on leave from the Navy and they spent their honeymoon moving across the country to San Diego, California where he was stationed. She worked on a military assembly line while Larry was deployed overseas to help with the Korean war effort. On March 3, 1953, Deborah, their first child was born, followed by Randall, Nov. 30, 1954, Karen Nov. 30, 1958 and Douglas, Dec. 25, 1960. They raised their family in Southern California from 1958 to 1980. Rose was a wonderful homemaker and great cook. An example would be her homemade bread roast beef sandwiches and miniature homemade pies that she would pack in their school lunches.

After Doug graduated from high school, Larry and Rose set off to a new adventure in Grants Pass, Oregon where they built a custom home and started a Sauvignon Blanc grape vineyard, Rancho Vista Vineyard, which produced an award winning wine by Valley View Winery. Rose helped with the planting and harvesting of the grapes and was very proud of their accomplishment.

In 2003, Rose and Larry decided to move back to their family roots in Sidney, Montana. They acquired her parents' home and she quickly made it her own. Here she enjoyed watching her grandchildren and even her great grandchildren grow up. Rose had to do everything just right. She went out of her way to make sure everyone felt special. She was so selfless and never expected anything in return. She lived by the golden rule and her strong faith in God which never wavered.

Rose is survived by her husband Larry, her four children and spouses; Deborah and Kenny Wersland, Randall and Janet Gamache, Karen and Patrick Parker and Douglas Gamache, eleven grandchildren and eleven great-grandchildren. She touched so many hearts and will be truly missed by all that had the privilege of knowing and loving her.