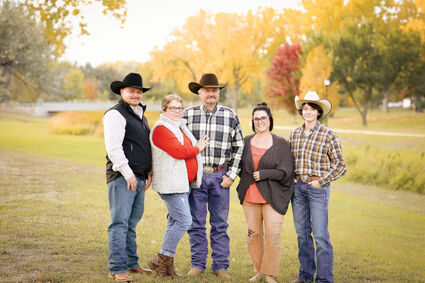 On Aug. 28, Mike and Diane Obergfell had the start of what would become the worst nightmare of anyone's life. Mike had cancer.

That day, Mike went into the ER for pain and was diagnosed. Then, after 30 days more of biopsies, tests, and the aggravating wait for results, it was decided. The Sidney farmer, rancher, oil field, and Sidney Sugars worker, Mike Obergfell, had stage 4 metastatic stomach cancer. Still, new biopsy results may change that. When he was initially diagnosed, the biopsies showed his cancer was a type of carcinoma. During this new biopsy, they were able to get a larger sample that shows it was actually sarcoma. This will possibly change his treatment a little. The Obergfells flew out to Seattle on Dec. 18 for a consultation at Fred Hutchinson Cancer Facility, Seattle. Mike's daughter, Sara Huft, said, "These last few months have no doubt been a roller coaster. It's been like a giant puzzle where none of the pieces fit together." Sidney's Cancer Center has also been so wonderful to work with. They don't get near the recognition they deserve." Amy Conlin, a family friend, said "Nobody plans at 51 to be fine one day and not the next." and "We have an amazing community that lifts each other up."

The family and friends of the Obergfells are planning a medical benefit to raise funds to go towards the medical and travel expenses the couple has incurred over this stressful time. Although he has been receiving chemo treatments, his cancer has resulted in multiple hospital admissions in both Sidney, Billings, and now a consultation in Seattle. A committee was formed to plan the benefit and set up an account at Stockman Bank. The Mike Obergfell Medical will be held at the Richand County Event Center January 14, 2023. A free-will donation roast beef dinner will be served at 5:30 p.m. There will be a silent auction from 5:30-7:30 p.m. and a live auction at 8 p.m. Any silent or live auction items may be dropped off at Franz Construction and cash donations may be deposited in the account named Mike Obergfell Benefit.

For more information contact Amy Conlin at 406-478-9579 or Ashley Fields at 406-939-0988. One can also follow the Mike Obergfell Benefit Facebook page for auction items and more information.