Irrigation Powers a $22 Million ­Economy on the Tongue River 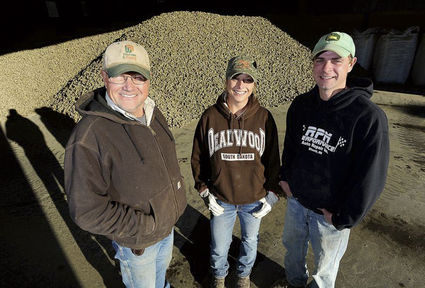 What does irrigation do for Montana's agricultural economy? Take a trip down the Tongue River Valley, where you'll find about 25,000 irrigated acres along its 190-mile length.

With 130 frost-free days per year, high quality soils, and a climate that features hot days and warm nights, growing conditions are nearly identical to California's San Joaquin Valley. Apples, pears, melons, squash-just about any crop grown in the Golden State can be grown here. There's a vineyard in Miles City.

"We have an image problem," says John Hamilton, whose thriving new orchard includes 25 varieties of apples. "People think of eastern Montana as a wasteland. They don't realize what we have down here."

The Tongue River Water Users Association has a contract with DNRC for 40,000 acre-feet of stored water for irrigation. Art Hayes Jr., President of the Water Users Association, says reservoir operations are managed by a committee that includes himself, DNRC, a representative from the Bureau of Indian Affairs, a member of the Northern Cheyenne Indian tribe, and one at-large member.

Art's great-grandfather came to the Tongue River Valley in 1884, and two years later was among the first settlers to bring cattle into the region. He also made one of the earliest water right claims.

"He realized nobody was going to survive here without irrigation," says Art. "Our family has quite a few of the early water rights."

Today Hayes' Brown Cattle Company operates on 10,000 acres, 500 of which produce irrigated alfalfa hay. A portion of the crop feeds his cows and the remainder is sold. A typical dryland alfalfa yield is 1-2 tons per acre; irrigated, the yield rises to 7-10 tons.

"Agriculture in the valley produces $22 million in revenue each year," says Hayes, "and 40 percent of that production comes from irrigated land, even though it's one-sixth of the total acreage."

Alfalfa hay is the most prevalent crop, accounting for $5.5 to 7 million of the valley's annual gross revenues. Les Hirsch takes this abundant local resource and turns it into a value-added product-feed pellets for livestock.

He got interested in making pelletized alfalfa 14 years ago. "I knew that if we could find a way to put it into pellets, we could add value and not be so dependent on the sale of a round bale."

Hirsch grows about 1,200-1,500 tons of alfalfa each year on 320 irrigated acres. He purchases additional alfalfa from local farms and ranches, along with dried shelled peas; the peas, rich in protein, are combined with alfalfa to make the pellets. Each year, he purchases about 50,000 bushels of peas within a 60-mile radius of his farm. "It's great for the local economy," he says.

Tri State Alfalfa Cubes sells pelletized feed across northern Wyoming and the northern tier of Montana. "It's turned into a product that fits the marketplace," says Hirsch. "Our family business has grown into sales of 7,000 tons per year."

"My mother remembers before the dam came in, without any storage there were several years that producers ran out of irrigation water," he says. "Around here we'd probably get one cutting of alfalfa without irrigation. With it, we get three."

Hirsch's business has led to further economic development in the area.

"We buy 12 semi-loads of binder to make our pellets," he says. "We buy a lot of diesel fuel to run our production facility. In any given year we've got 425 semi loads of ingredients coming in or going out."

A local trucking business has sprung up. Hirsch also needed to purchase customized trailers and trucks, and there are 2 or 3 families in the area providing these services.

"A dollar turns over about seven times here," he says.

John Hamilton is a local innovator. "This area grows just about anything you can grow in California," he says. To prove it, Hamilton in 2007 designed an orchard with 105 fruit trees. He's growing plums, pears, apples, cherries, peaches.

"I'm growing about 25 different varieties of apples-early, mid and late season varieties," says Hamilton. "This year it was phenomenal. Some of the Honeycrisp apples weighed half a pound each. This was my first year of full production."

Hamilton is known in Miles City as The Watermelon Man. "A lot of people out here have never tasted vine-ripened fruit," he says. "There's no comparison to a watermelon you buy at the supermarket. Those are picked green and they ripen during transport. Mine are picked ripe and sold fresh off the truck."

He also raises squash, cantaloupe, and pumpkins. He's a fixture at the Miles City Farmer's Market.

All of Hamilton's crops are grown with irrigation water.

"You can get by without irrigation for one in twenty years," he says. "The other 19 years you'll get nothing. We can regulate the flow to where we get irrigation water all summer. It's a tremendous system we have." 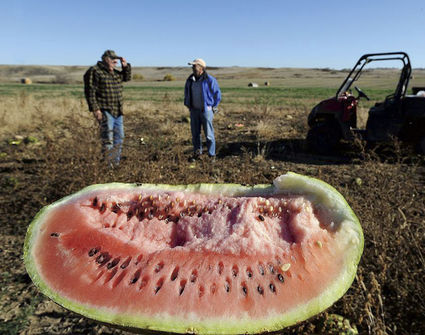 Watermelon: John Hamilton is known at the Miles City farmers market as "the Watermelon Man" for his delicious vine-ripened watermelons.

"A lot of these crops are sensitive to salt. We've always had high quality water in the Tongue River until energy development. With naturally occurring salts in the ecosystem, you start adding a little more and you can tip the balance."

Hayes says the balance has already been tipped toward higher levels of salinity. "We're at the point now where we need a strong flushing flow each spring to mitigate it."

Each of DNRC's 21 water projects supports an agricultural economy. Irrigation water generates direct economic benefits by directly increasing the supply and / or value of some crops, and in the process generating jobs and income. And like the Tongue River Valley, most all irrigation-driven economies produce a ripple or multiplier effect, making the overall impact larger: farmers and ranchers spend a portion of their income on goods and services in the local area, supporting local businesses and their workers.

Go to http://www.dnrc.mt.gov for more information on DNRC's programs and services.