Williston Named 2015 City Of The Year 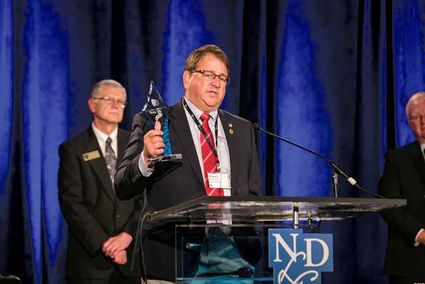 Williston, the fastest growing micropolitan for four years in a row, was named the 2015 City of the Year by the North Dakota League of Cities Saturday during the closing event at the League's annual conference Sept. 24-26 in Fargo.

League President and West Fargo City Planner, Larry Weil, read off the list of Williston's many accomplishments over the past few years. They included: issuance of over 2,000 housing unit building permits since the beginning of the year, beginning construction of a new high school to accommodate the 40% growth in student enrollment, launching a six-year $1.04 billion capital improvement plan, a main street reconstruction project, and the addition of many new businesses.

Williston Mayor Howard Klug accepted the award on behalf of his city. "As mayor of the city of Williston we are honored to receive the City Of The Year award from the North Dakota League of Cities. This award reaffirms that Williston is doing the right things in building a community that our residents will be proud of for many years," Klug said.

Williston has experienced dramatic growth since 2008 due largely to the rush of oilfield workers coming to seek their fortunes in the Bakken Shale Oil and Gas Play. The City's population tripled and so did its boundaries. Despite the challenges of guiding the fastest growing small town in the US, civic and private leaders have remained steadfast in their efforts to make Williston a better place than it was before. "We have worked hard to get our message of economic opportunity and a city that is improving every year to lawmakers and residents outside of western North Dakota. This award shows the faith that others have in our city when they provide funding to help with our many projects," said Klug.

The City of the Year award was established in 1984 to recognize North Dakota cities for the quality, number and progressiveness of activities undertaken in the community. The winner is named annually during the League of Cities annual conference.