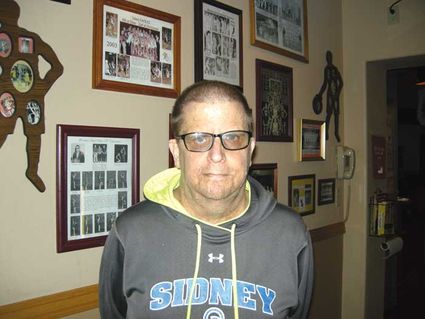 Employee loyalty is really hard to find but Kevin Johnson has been loyal to the Winners Pub in Sidney since it opened 20 years ago.

Kevin was looking for a change from Path and the Pro Shop when Lola Hansen asked if he wouldn't like to try bartending at the new Winners Pub about to open across the street from his family's business, Johnson Hardware. She recognized his interest in sports as a friend and a customer of the South 40. "Although he had no experience as a bar tender, I convinced him that he could back out if he wasn't liking it," she said. "He's been our rock ever since."

When Hansen asked him to consider the position, Johnson said he made a list of plusses and minuses and decided he was going to try it. "It's the best decision I ever made," he said. "I never thought I'd be here for 20 years. Lola saw something in me that I didn't see in myself and I was pretty much the first employee they hired."

"They treat me really good and I really love my job. I get to watch sports and talk about it," Johnson said about why he had stayed so long. Johnson enjoys taking care of his customers and credits great co-workers with making his job easy.

Hansen says Johnson is always on top of the sports boards and makes sure the right games are playing on all the TVs, whether it's football, baseball or hockey. He has a fantasy team and attends Sidney Eagle events so he knows those players and coaches as well.

Johnson is the son of Hubert and the late Lucille Johnson. He has been married to Jodi for 15 years and their daughter Ashley is a Sidney High graduate working at DeNardos while contemplating college choices.

The Winners Pub is celebrating its 20th anniversary this weekend. Stop by on Kevin Day, Sunday, November 5th for some cake and congratulate Kevin Johnson on his 20 years at the Pub.