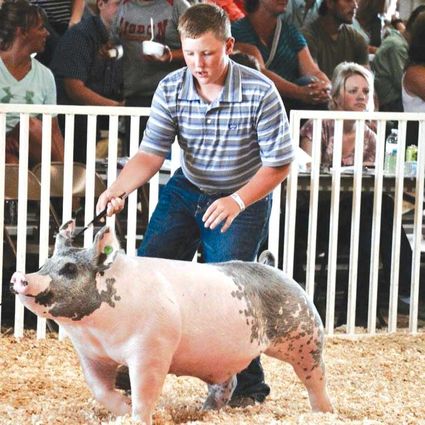 Cooper McNally with his show pig.

Raising your own herd of pigs and showing them around the United States is not something that every 13-year-old gets to the opportunity to do, but Cooper McNally definitely has.

McNally has been a member of the Forever Buds 4-H club for the past four years where he currently serves as the Historian (chapter office where responsibilities include keeping a record of the club's accomplishments and activities for the year, collecting pictures of the club and its members, and organizing a scrapbook to tell the club's story for the year).

Through 4-H, McNally enjoys different challenges his market animal and breeding projects bring each year. He also enjoys preparing them for the county and state fair. "I really like hanging out with my friends and meeting new people. 4-H has taught me how important it is to give back to my community, to support others, and always be thankful and respectful," explained McNally.

He is not only preoccupied with 4-H and school, but he also has his own business of raising show pigs. Entrepreneurship is something McNally knows all too well. McNally said, "I raise anywhere from five to eight pigs every year which I keep in my show barn where they all have an individual pen. I mainly buy crossbreeds to show and expand my herd of pigs. Crossbred pigs are very common and just my style. The goal for my hogs is to have them at the weights where they look their best and broke."

McNally has shown pigs around the Unites States. He has competed in shows and jackpots in Wyoming, Montana, and Kansas. "I've shown at jackpots in Powell and Greybull WY, Billings and Sidney, MT, and at the Richland County fair as well as the Montana Fair in Billings, I have also shown pigs at the North Dakota State Fair. I've competed at national shows such as the NILE in Billings, MT and the American Royal in Kansas City, Kansas," explained McNally.

He notes that he is most proud of his showmanship winnings. "I enjoy showmanship because it is a type of competition where I can control how well I work and show," said McNally.

Most of the pigs that McNally has shown he buys from Rhett/Maverick show pigs that are based out of White Earth, North Dakota. "They have been raising pigs for about ten years but have started selling more in the past three to four years. Rhett Wolter and Maverick Squires, (Rhett/Maverick show pigs), both showed pigs when they were younger and continued with it. They met at a show in Oklahoma where they became good friends and became partners on all their pigs. They have a numerous amount of sows with many different pedigrees," explained McNally.

McNally explains that it is fun to win shows, but at the end of the day, he would rather have good calm pigs that look fine in the show ring and don't act up rather than having a crazy pig that he can't catch up to. "My advice for kids wanting to show pigs is to have fun and don't worry about winning. Do the best that you can do, and you'll be fine. It is good to stand out and have something unique with your showing technique. When it comes to feeding show pigs, try to find a good common brand that's not too expensive but don't go out and find the cheapest feed you can," said McNally.

McNally believes that he has had a successful year when he meets new people, places in the top half of a showmanship class, and receives at least a blue ribbon for all of the classes he has participated in. He includes that the best part of showing pigs is when his parents, younger sisters, and him practice, work, and have fun together. McNally said, "One of my family's favorite saying is The family that shows together, grows together." Showing pigs is a great way to meet new people and have fun, and yes, showing pigs takes dedication and time, but in the end, it always seems worth it."