Transystems Optimistic For Future Of Beet Industry In Region 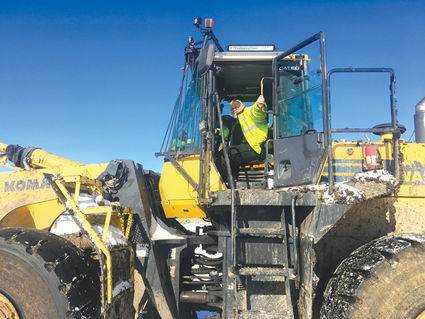 John Hoagley, plant manager for Transystems in Sidney, is in his loader preparing to put beets in the back of a Transystems truck (photo by Jordan Hall).

Transystems was founded in 1942 by John S. Rice and continues to be a family-owned operation that specializes in bulk commodities distribution. The company operates in the Midwest and Western United States and has a significant presence in the MonDak region, especially as it relates to the transportation of sugar beets between pile grounds and beet processing plants. As a major hauler of the agricultural commodity, few others have their finger on the pulse of the beet industry quite like Transystems.

The Roundup recently spoke with Transystems Sidney plant manager, John Hoagley. Hoagley, who has been the plant manager for 15 years, explained the role that Transystems plays in local beet production.

"We do construction products, we work on the freeway hauling road aggregate and more, but 90 percent of our business is hauling beets," Hoagley explained.

Hoagley explained that just a few days were left of beet work until the next crusade, but Transystems will be busy preparing for the next year's haul.

"We have about four and a half days left of hauling for the factory. After that, we start getting all of our equipment back into working order because we have a lot to go through. When we haul 130 thousand pounds in our trailer, that's a lot of weight and a lot of maintenance."

Hoagley was optimistic for the future.

He said, "I'm getting excited because everything that I'm hearing is that farmers are going through with a purchase on the factory and will take it over like a co-op type thing. We'll continue to haul for the farmers and the outlook looks good."

Hoagley explained the benefits of a possible farmer buy-out, "They'll not have to worry about the factory getting sold and they'll have more control over what happens with the crop."

The last year was a good year for the beet industry, according to the plant manager, who reported, "The sugar market is at the top of the charts compared to everything else. The sugar content is good and the purity levels are climbing back up. The factory is very pleased with what's happening right now in regards to that."

When asked if there were any legislative changes on the government level that would have an adverse effect on beet production, Hoagley said he wasn't aware of anything that was on the horizon that could stifle the industry. In fact, he anticipated Transystems growing. 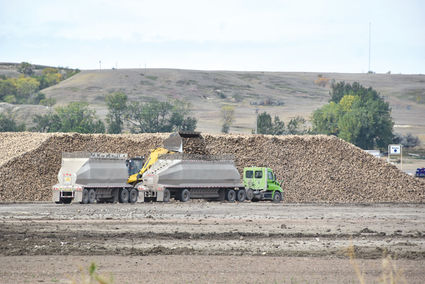 Beets being loaded at the Savage beet dump

"I hire approximately 52 drivers and 10 loader operators, just from our site here," Hoagley said, "The sugar factory has a huge amount of people that help to run the plant. Hiring should be good."

Transystems, which operates in North Dakota, Minnesota, Wyoming, Montana, Idaho and Oregon, has a booming business and the Sidney plant is just one part of their overall business.

Hoagley explained, "Those offices in the other locations are all hustling just like we are. Other locations, like in the Red River Valley or in Idaho are a lot larger than we are. Sidney is like a satellite location for Transystems, but this is where Transystems started."