Steve Yockim Retiring From A Rewarding Career Of Coaching And Teaching 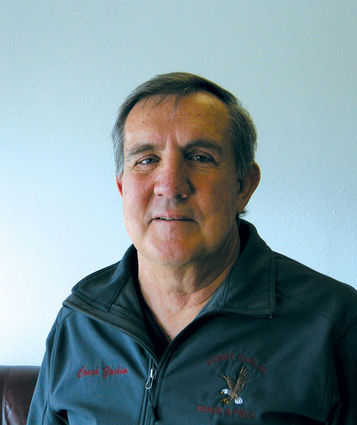 After twenty-eight years of teaching and twenty-seven years of coaching, Steve Yockim is retiring for family reasons this year from a fulfilling career in the public school system. He loved being around the kids. He said, "I think that's the hardest part of retiring." (Photo by Jaymi Loobey)

Steve Yockim did not plan on coaching. He went to college and got the credentials to teach math, but planned for greater things. His love for kids turned his life in a completely different direction. Now, after twenty-eight years of teaching and twenty-seven years of coaching, he is retiring this year from a fulfilling career in the public school system.

Steve Yockim was born in Sidney, Montana. He lived there and went to school until his family moved to Miles City when he was twelve. There he finished school. When he graduated, Steve attended Montana State University in Billings, Bozeman and Missoula, the University of Chicago and the University of Colorado in Boulder. He had acquired a Masters in math but was not sure what he wanted to do. He had considered becoming a lawyer or psychologist but came back to Sidney at twenty-eight to work while he made up his mind which way he wanted to go with his continuing education. He got certified to teach and got a job teaching in Circle, Montana for three years. He took a break for a few years then got a job teaching math at Sidney Public Schools. He taught there for twenty-five years teaching math, computer sciences and worked for eight years as the Tech Director. Steve said, "I had a lot of different options. Teaching felt right." While in Sidney Steve also married and started a family.

Then, there came a time when Steve wanted to work with the students outside of school. He began coaching Cross Country and Wrestling in Circle, Montana in 1982 and stayed on for three years. Then, in 1995, Steve's children got involved in track and other sports back in Sidney. He wanted to be with them so he got a job as a Track Coach at Sidney High School. He coached in Sidney a total of twenty-four years with twenty-three of them being as a Pole Vault Coach. He and the team did very well. From 1996-2018, when Steve coached, Sidney High School had seventeen combined State Pole Vault Champions. Thirteen of the State champions were girls (highest for any Montana coach, third highest in the nation) and four were boys. Seven of the girl's State Championships were in consecutive years. He coached several other divisional champions and runners up. He was able to coach Leila BenYoussef, who set the Montana High School State Class A Girls Record in 2000 for clearing the twelve foot, four-inch pole and went on to be in the 2008 Olympics. He also coached Garrison Hughes, who set the Montana High School State Class A Boys Record in 2017 for clearing the sixteen-foot pole and made the highest Montana High School Vault in 2018 of seventeen feet. Steve has been recognized as Assistant to the Coach of the Year by the Montana Coaches Association in 2000 and 2017. He was also awarded Assistant Coach of the Year in 2014.

Steve's retirement comes now due to a need to spend more time with his family.

In a letter he wrote to the Roundup and several other papers Steve said, "I will forever be grateful to the Sidney School Administration, School Board, Staff, Parents and the Sidney Community for their support of the track program. A special thanks goes to coaches Steve O'Toole, Roger Merritt, Ed Larson, Virginia Dschaak, Stacey Collins and Justin Collins. Without their support and advice I would have never survived as a track coach. I also need to thank the Athletic Directors, Ron Ewing, Mike Gear, Ross Hall, Jeff Mead, Rueben Moreno, Chris Merica and Chris Lee. They always had a smile on their face on the numerous occasions when I entered their office looking for money to buy more poles."

"I loved the genuine camaraderie of coaches across the state with whom I competed. I learned something from each of them and all added significantly to my understanding of the sport. And finally, I am forever grateful for having the opportunity to work with a multitude of student athletes. Their work ethic and dedication to excel inspired me to be a better person and coach. It is an enduring pleasure to continue to watch these young men and women move into adulthood. The future is in great hands."

Steve also said he would continue to help the track program at Sidney High School in a volunteer capacity and support the Montana Track community through his web sites: http://www.TrackMontana.com and http://www.PoleVaultState.com. He had had a need to find statistics on the history of Pole Vaulting and had found the previous websites wanting so he started his own sites.