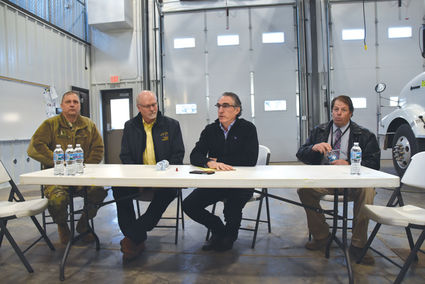 The recent flooding of the Yellowstone River has been the worst in memory for many in Richland County, Montana and McKenzie County, North Dakota. With roads shut down due to flooding and residents still unable to make it home to assess the damage, the question for many remains when things will get back to normal.

The Roundup spoke with McKenzie County Emergency Planner, Karolin Jappe, who explained the extent of the damage and expressed that it could be weeks before the damage was properly assessed.

Jappe told The Roundup, "The ice jam has broke, and now we're just waiting for the water to go down."

When asked how many were displaced because of the flooring, Jappe answered, "I need to bring my list because there are a few more people coming in who didn't at first. I think there's about 60 in total.

Not all damage is to homes, however. Jappe included, "Now, not all of them had house damage. Some had barn and farm damage. But there's at least 60 properties damaged in some way, shape, or form."

When asked the last time there was a flood of this magnitude, Jappe answered, "I think it was 1994, but there has been nothing quite like this. If so, it was three or four generations ago. But the current farmers and ranchers have seen nothing like this."

Jappe plans to do whatever she can to find emergency aid relief for those affected, most of whom did not have flood insurance.

Jappe was hopeful there wouldn't be more flooding statewide, leaving funds to assist those affected locally. When asked if more flooding was anticipated elsewhere, Jappe responded, "There could be. It's very possible. I think we're in a good spot, but I don't want to say that 100%."

Jappe's plans are to remain in Fairview until all of her immediate work is done.

She added, "I am going to be in Fairview regularly. The fire chief has allowed me to use his office for a while. So this week, I plan on being here all week, especially for all the people who couldn't be here for the multiple-area agency center because there are a lot of hands at play. If they have questions, they can come ask. I'd say there are 30 or 40 families that can't even make it to their house yet."

Jappe is staying busy offering advice to residents, claiming, "I have an appointment this afternoon about doing damage assessments, but it's hard to do damage assessments because they're still so affected. If FEMA doesn't have a picture, it didn't happen. If you need to take one hundred or two hundred pictures, take them and have them documented."

McKenzie County has not decided to take part in the national flood insurance program, which could help those affected by such flooding. However, there is a cost-benefit analysis that residents need to be aware of.

Jappe said, "Most of these people don't have flood insurance. FEMA has never come to McKenzie County or this part of McKenize County, but just Watford City and Alexander. When you do sign up to become a national flood insurance program, there are things you can do with your property and things you cannot do with your property. We need to have a meeting some night – and I'm sure we need to get people back into their homes first – but we don't want to force anything on the people here. We can change it if you want or leave it the same. We don't want to force the national flood insurance program on them. It's a 'give and take thing' and so we want people to know what people will give up it they want to be a part of that program."