Neu's Super Valu to Celebrate Anniversary and Renovation May 7 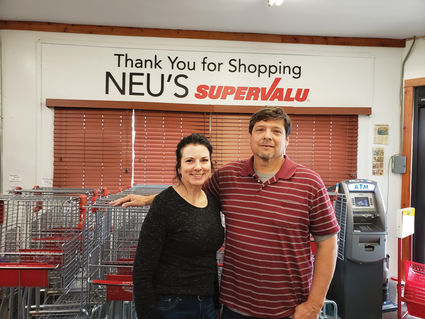 Laura and Tim Neu own Neu's Super Valu in Fairview

Four years ago, at 1 p. m. on April 30, Tim and Laura Neu purchased the Super Valu store in Fairview from Bill and Marilyn Huft. Next Tuesday, May 7, they will host their 4th Anniversary Renovation open house and Fairview Showcase from 9 a.m. to 7 p.m.

Neus have a lot to celebrate right now. The store has undergone a complete facelift and has more of a country look now that the yearlong renovations have been completed. And Tim just had a good checkup in Salt Lake City.

Tim was raised in Fairview and graduated from Dickinson State in 1991. He's always had an interest in the grocery store business but life led him to Florida and a career in finance. Fairview drew him home in 2009 when he went to work in the oilfield with his brother Mark at W.L. Neu Construction.

He knew Super Valu was for sale and saw the opportunity to fulfill his earlier dreams and create a nice, good size store. "The store is a vital thing for Fairview," he said. "In any small community, if there is no store, it affects the health of the individual and the town. Everything suffers."

When he bought the store, Tim knew it would be a lot of work since no updates had been made for many years. The first thing he did was reduce prices storewide by 20 to 30%. Then he added a larger, 4 page weekly sales ad. The next big step was the deli, answering to demand from his customers. Overall, he has added 500 to 600 items with about 75 each in the meat, frozen, dairy and produce departments.

An independently owned retailer, Neu's Super Valu is supplied by Super Valu, which merged with Unifi about a year ago to greatly expand the product base.

When Tim was diagnosed with stage 4 pancreatic cancer in November of 2017, he spent the first few months in shock and disbelief. And then, he decided to work on the store. He made a five year plan to substantially add to the existing store or build a new one, cancer or no. "Think big or go home" is his motto." He credits that activity with helping him maintain a positive attitude through months of radiation and chemotherapy and now says he'll live forever, or at least until he's 83. "The renovations and the store helped my health and kept me in better spirits," he said.

After working with the bank to get a package approved, the first step in the renovation was to install the first automatic doors in Fairview. Not only are they convenient for customers, they were needed so all the new refrigerator and freezer cases could be brought in. The furnace and air conditioning were moved to the roof and old duct work was removed to allow more refrigeration and ceiling space. All the new refrigerator cases have more efficient compressors and LED lighting has been installed in some areas, with more to come. Bright new signage decorates the store and leads customers to the various departments.

Neu's Super Valu is a full service grocery store. "You can find everything you need within your budget," Tim commented. He said he hopes people will realize that they can shop locally instead of making the big trips out of town which eat up the savings in gas and motel rooms. "By providing a nice store, we're hoping to change some of those habits," he added.

In addition to an excellent meat, produce and grocery selection, Neu's has the deli, ready made floral bouquets, greeting cards and a f'real machine. Gift cards are also available. The deli offers hot and cold grab and go, with baked, fried and rotisserie chicken. Delicious homemade entrees such as chicken enchiladas, homemade chicken pot pies and meatloaf are cooked up fresh daily. Homemade bread with high quality meats and cheeses sliced up fresh make up their "belly buster" sandwiches as Tim calls them.

Neu's Super Valu employs 14 full and part time people. Tim is general manager and runs the meat department and wife Laura runs the deli, while sons Bryce and Tom manage the frozen department and work in the deli and meat department respectively. Pam Hoover, who has been with the store since she was 16 years old, is assistant manager as well as dairy and bakery department manager. Tami Gullickson is head cashier and works the deli while Lois Unruh and Cindy Knels are co-managers of the produce department and also cashiers. "Every person does a lot of things. It's typical of a small store, everyone helps out wherever they are needed." Tim really appreciates everyone who works at Super Valu. "I want to thank all my great employees. They really stepped up while I was sick," he said. "And a special thank you to Marilyn and the late Bill Huft who filled in and cut meat until I could hire someone."

Seven high school kids have found employment at the grocery store. "It's hard work but it's a chance for them to learn a great work ethic and a foundation for later," Tim said. He really likes the kids and would hire more if he could. "I hope we grow," he said. Carson Cayko and Garrett Johnson are at the store at 5 a.m. to help with truck and occasionally work on the weekends. Kayden Skogas, Riley Bushnel, Britnee Gullickson, Cadie Lester and Brianna Carr work as cashiers, deli assistants, carryout and wherever they are needed.

To celebrate their 4th anniversary and the store renovation, everyone is invited to an open house on Tuesday, May 7 from 9 a.m. to 7 p.m. "We just want everyone to have some fun," Tim said. "Come in for some good food samples and refreshments and register to win some great prizes."

It's also Double Ad Tuesday where the sales overlap and shoppers can take advantage of sales for both weeks. They are also planning some Super Saver Specials and shoppers who spend $100 get a $5 instant coupon which has no restrictions.

The Fairview Chamber of Commerce also invites Chamber members and those who would like to become members to the first Fairview Showcase from 5:30 to 7 p.m. on May 7. Enjoy special treats and networking with other members. 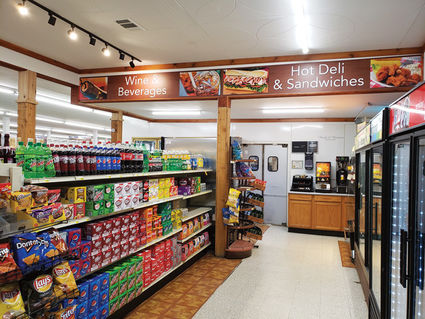 Growing up in Fairview in the 70s and 80s, Tim experienced a vibrant town with two great grocery stores, a hardware store, lumber yard, cafés, a Ben Franklin store, and much more. He would truly like to see Fairview revitalized and brought back to where it was then. "I want to see Fairview thrive and have opportunities for other businesses. Success leads to success. I would also like to help make Fairview a destination for shoppers from Sidney, Williston and Watford City. It's a nice drive. We have a small store with an excellent selection and it's not exhausting to shop here. We welcome all those folks to come and shop, dine and play in Fairview."

We incorrectly listed Lois Unruh as the produce manager and Cindy Knels as cashier. In actuality, both Lois and Cindy are equal co-managers of the produce department and both also perform cashier duties. The story has been edited to reflect this.

We apologize for this error.