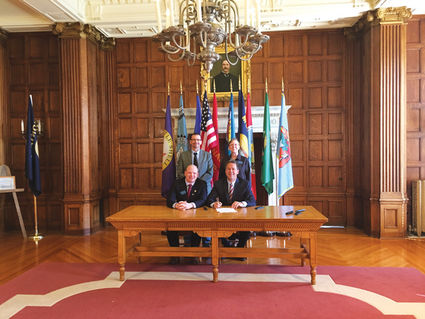 Helena, Mont. – Governor Steve Bullock has signed House Bill 656, a bill sponsored by House District 35 Representative Joel Krautter (R-Sidney), to return more oil and gas tax revenue to eastern Montana cities and towns. Sidney Mayor Rick Norby was on hand for the bill signing and said, "This has been one of my proudest moments as Mayor and I am so thankful for the work of Representative Krautter." In signing the bill Governor Bullock stated that, "When eastern Montana does well, all of Montana does well."

Senator Tom Richmond (R-Billings) carried the legislation in the Senate and stated the bill, "serves a very good purpose, it does provide some direct funding for impact areas that would not otherwise go there."

Fairview Mayor Brian Bieber, while unable to attend the bill signing was thankful to hear about the passage of HB 656 stating, "Thank you to everyone involved in this process. Funding such as this is crucial to the survival of Fairview and other small oil impacted towns and cities."

Representative Krautter credits the successful legislative effort to a united approach at the legislature. "We started having phone conferences and meetings with eastern Montana mayors and interested stakeholders before the session began, to find common ground, identify our strategy to get this passed and address any concerns early. I especially want to thank Tim Burton and Kelly Lynch with the Montana League of Cities and Towns for their assistance and hard work on this bill. Bringing more oil and gas money back to eastern Montana communities, where the wealth is produced and impacts are felt on public safety and infrastructure was a priority of mine, so I'm very happy to see this victory for the people of my district and eastern Montana," Krautter said.