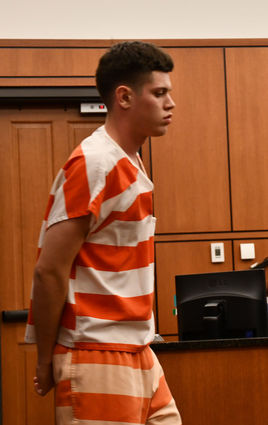 Kyle Lee Seversen enters Sidney City Court for his felony initial appearance before Judge Luke Savage on July 3. Seversen will have a preliminary examination on July 10. His next appearance is scheduled for July 22.

SIDNEY, MT - July 3, 2019 - At 11:30 PM on July 2, 2019 the Sidney Police Department responded to the Loaf-N-Jug convenience store at 706 S. Central Ave. in Sidney, Montana for a report of a shooting that had occurred in the parking lot. Upon arrival officers located an unresponsive, 20 year old, male subject who appeared to be the victim of a gunshot wound. Richland County EMS assessed the victim and determined that he was deceased.

At 11:35 PM, Kyle Lee Severson, 19, from Sidney, entered the lobby of the Richland County Law & Justice Center and identified himself as the shooter. Severson was taken into custody without incident by Sidney Police and has been charged with one count of Deliberate Homicide. Bail has been set in the amount of $2,000,000.00. Severson will make his initial appearance in Sidney City Court before Judge Luke Savage at 4:00 PM on July 3, 2019.

This matter remains under investigation by the Sidney Police Department with the assistance of the Richland County Sheriff's Office.

The victim's name is being withheld until confirmation that all family notifications have been made.