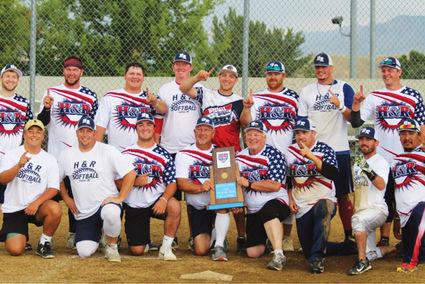 For coach and player Art Herman, this makes three state titles and numerous other tournament wins under his belt. "Every year they get harder and harder," he explained. "If you don't hit the ball and play a great defense, you don't win." Herman has been involved with softball for 46 years, and has been running the softball league in Richland County for 40 of those years. "We won a state tournament in 1984, when I was just a kid," he joked. His team won again in 2014, and now in 2019.

The team travels all over Montana for games, including Billings, Missoula, and Bozeman, and also plays in Minot, Bismarck, and South Dakota. "We play about 11 weekends," Herman explained. "We put on a lot of miles," beginning the second week in May and finishing up with the state tournament the second weekend in August.

The H&R team is comprised of players from Richland County, and as far as Billings and Colstrip. "You've got to mesh it all together," Herman explained. The team had a slow season, and went into the state tournaments without one win. "We had to beat 18 teams," Herman said. At the state tournament, "the team finally played together. They became a team. They were unbeatable at state-they just walked through everybody, and those were some really tough games," Herman said of their experience.

In addition to team members for their hard work, Herman gives credit to H&R's sponsors for supporting their team. "They pay our entry fees for the tournaments, they go anywhere from $250 to $400. They need a big thank you," he said. Sponsors include H&R Construction, Domino's Pizza, The Depot, Builders FirstSource, Action Auto, Eagle Country Ford, Sunny's Family Restaurant, TNT Trucking, Kenny Herman-Waylon Olsen, and Millers' Corner.