An Honor Not Been Achieved Since 2015 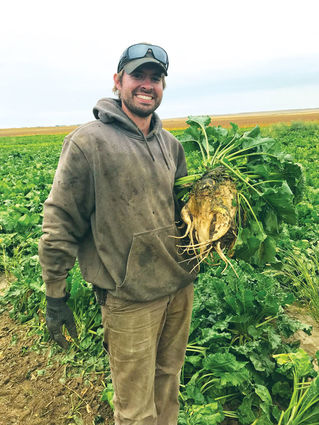 Bryce Jorgensen, Savage, averaged 29 tons per acre and 20.09% sugar. "I was very pleased that I made it in the 20/20 club. sugar beet farming is a risky business and profit margins are getting tighter every year so there is more pressure to grow a good crop these days," stated Jorgensen.

To qualify for this exclusive club, a sugar beet producer must average over 20 tons per acre and 20% sugar for the entire crop. "This is an elite group of growers," added Duane Peters, Sidney Sugars Incorporated, Agricultural Manager.

Jorgensen has been farming for a little over eight years. "This is my eighth harvest," recalls Jorgensen. Over these years, he has been helping his dad, Dave Jorgensen, farm in addition to farming his own acres. "My short farming journey has already had its high points and low points. Getting started farming is hard these days. I am thankful for all of the people who let me rent land and borrow machinery when I didn't have any."

Jorgensen enjoys farming, especially raising sugar beets. He explained that one of his favorite things about raising the crop is watching it come up in the spring. He said, "We put a lot of effort into planting the crops and hope for the best crop we can get. It is rewarding watching the crops grow throughout the summer."

He mentioned that the "nice cool nights" in September helped increase the sugar percentage of his crop.

When asked how this year's growing season went, he responded, "This spring started out tough like usual. We had a late freeze, after completing planting; all the beets were up when it froze. I had a sick feeling checking fields the next morning wondering if anything had survived, and I was fortunate to not get hit hard enough to have to replant. We had good growing days this summer, although being hot and dry, my pivot almost ran steady for July and August."

As for beet harvest, Jorgensen said it is very labor intensive. "We put in a lot of extra work and time. I like to see the progress of harvest with a hard-working crew."

Jorgensen added that the weather has been challenging during beet harvest. He said, "The weather threw us for a loop, it was too warm and then too cold; it was a race to finish before the cold."

The Mortenson Farm Partnership, Buford, ND, averaged 26 tons per acre and a district high of 20.17% sugar over 850 acres. "I feel really honored and really surprised - to have that good of sugar content over that many acres is a huge blessing and really is somewhat of a miracle," said Joe Mortenson.

The Mortenson Farm Partnership consists of Joe Mortenson, his dad, Steve Mortenson, and about 9 full-time hired hands. "We farm somewhere between 800-1,000 acres of sugar beets, depending on the year and with the rotation," stated Joe.

The Mortenson's have had many years of experience growing sugar beets; "As I was growing up, I was always helping my dad on the farm and then my grandpa, Emery, who also grew sugar beets," said Joe.

The sugar beet growing operation started many years ago with Joe's grandfather, Emery Baxter, who was a long-time Buford area farmer.

And then in the 1980s, Joe's father, Steve, tried his hand at raising sugar beets with little over 100 acres and one tractor. After many years of dedicating his time to the land, his operation evolved into a successful 12,000-acre farm, where he performs both dryland and irrigation farming.

"What my dad has built over the past 40 years is kind of where it has come. It is really neat to be a part of an operation that once had little to nothing and now has big trucks and 12-row diggers; just the way it has grown is what makes it so neat for me," added Joe. 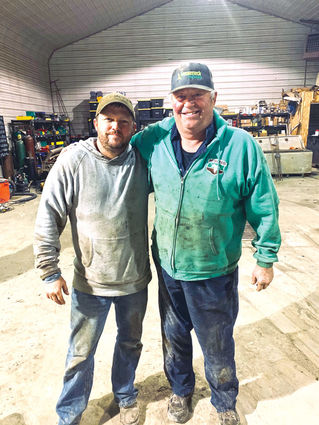 Joe has been helping his family farm for as long as he can remember. The only time he was not farming is when he went off to college for four years, but soon after that time period, he returned home and started farming full time.

He explained that he enjoys growing sugar beets because of how unique the crop is to the area. "We are so lucky that we have the Sidney Sugars factory because the next closest place, as you go east, is the Grand Forks area so there really aren't any beets in between here and the eastern side of North Dakota."

Making the 20/20 club makes growing beets just that more special for the Mortensons. "It really is an honor to qualify for the club. I give all the credit to our hired hands and to what my dad has done for the farm over the years. I have only added on to that and have helped grow it from there."