Choose Plants For All Summer... 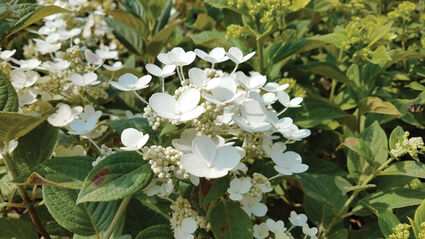 With July approaching we're entering what I often refer to as the "dog days" of summer. It is a common misconception that the best planting time is the spring of the year. Which actually is incorrect. The best planting time for anything that is "perennial" is actually the fall. If you remember, perennial plants are plants that return year after year adding color and interest to the landscape season after season. In this article, I will share with you some of my favorite items for "midsummer" and "late season" color and interest.

The month of July brings some of the hottest temps of the summer. When we realize that a plant's water needs are directly related to its ability to support and develop a flower it's easy to wonder why anything would flower during this month. But to assume that, would be a mistake. Perhaps one of the stateliest trees to any landscape, the Linden, also known as Basswood is a wonderful addition to any area that receives consistent moisture. The established and well-maintained lawn is a great location for these beautiful trees. The Linden Genus has two primary species. The "Littleleaf" and the "Bigleaf", the latter is often known as "American" Linden. From their Latin name Tilia americana. Both produce a unique while attractive bloom, the pollen of which is a wonderful food source for pollinators at a time when few other items are blooming.

Also, great choices for the month of July are later flowering Spirea such as Anthony Waterer and Goldflame. Spirea is a strong "backbone" to the Northern Garden. In addition to their bright fuschia-colored blooms in early to mid-summer these spireas also put on a dramatic show in the fall. Upon cooler temperatures, the leaves of these plants take on beautiful hues of red and orange. The colors are bright and vibrant, with an almost molten appearance.

With the month of August, the hot part of the summer is generally starting to leave us behind. During this month we can often begin to expect our old friend(s) the Hydrangea to begin their show. While many hydrangeas are not suited for our rough northern climate, the "panicle" hydrangea is a wonderful choice for midsummer color.  There is an increasing number of hybrid forms of Panicle hydrangea, but our favorite standby varieties are the Quickfire and Limelight. The Quickfire is well-known and "begins its show" early, often flowering weeks ahead of others in its species. A fun fact about the Panicle hydrangea and a feature often boasted in many of the cultivars are the changing blooms. As these blooms develop and age, their color often changes. These plants are great choices for late summer blooms.

In addition to the Hydrangea, the viburnum offers some late summer interest. One of our favorite shrubs, the viburnum trilobum, also known as the American Cranberrybush offers something for the landscape almost every time of year. White flowers adorn this shrub in May and early June followed by rich dark red fruit developing in late summer. Usually, in August, the fruit is food for the birds. This shrub finishes off its show in the fall with its foliage taking on rich red tones.

September is a time when many trees and shrubs are beginning to prepare for winter. While trees and shrubs are starting to "go the other way" for winter there are many perennial plants that are rising to the occasion and producing a beautiful show. Plants such as Black-Eyed Susan (Rudbeckia 'Goldsturm') with its bright yellow daisy-looking flowers are a great "late summer" choice.

And let's not forget the charming Russian Sage. This plant is often mistaken for Lavender, but Lavender is not winter hardy in our climate. Russian Sage has long been a popular late summer choice but recent years have introduced smaller more compact varieties of this plant increasing the opportunity for its uses in the landscape. The common Russian Sage can get as tall as four to five feet while dwarf varieties like the Little Spire stay as short as two feet.

As always we are proud to be a resource for your plant questions and challenges as well as providing a diverse selection of plants, from indoor houseplants and tropical foliage to perennials, trees, and shrubs for use in improving your outdoor spaces. We hope you will visit us soon! In the meantime, good luck, and happy growing!