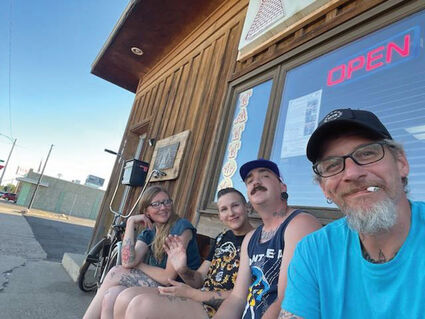 Temple Tattoo Gallery has opened its doors at a brand-new location as of July 1. The tattoo shop debuted on March 17, 2012 with a storefront on Central Ave., Sidney. The establishment would call the downtown location home for the next ten years until May 2022 when an opportunity to expand the shop happened suddenly. The whirlwind move settled Temple Tattoo into 204 2nd Ave. NE, Sidney.

Owner and artist Darren Sult started the business after working in other shops for a decade, with an apprenticeship in Gillette, WY. The Bakken was booming at that time which seemed like the perfect opportunity for him to set up shop in his hometown.

"I was tired of working for someone else. The price was right and the place was right," Sult remembers.

The business saw changes throughout the first five years including expanding from one to both sides of the building while he had apprentices and guest artists, offering piercing services, making vinyl stickers and screen-printing shirts. But the biggest changes came at the end of 2016 when the shop downsized back to one side and Sult welcomed his first and only child, son Axel.

The boom had slowed and reliable help was hard to find at the shop as Sult now juggled tattooing, piercing and fatherhood, bringing Axel with him four days a week from the time he was a baby.

In March 2017 Meagan Dotson started working at Temple Tattoo Gallery where she would complete her piercing apprenticeship. In addition to piercing, she took over customer service, scheduling, and of course, the phones, jokingly telling customers that if Sult answered they should hang up and call back when she was there. An extra pair of hands also meant extra help with a baby boy, who would quickly be a toddler and just started kindergarten in August... and has possibly had one of the coolest beginnings in life.

As years passed, Dotson's business steadily grew and she incorporated spray tanning services. Sult was beginning to get booked out farther and farther until Covid pushed him out three to four months at a time. The shop was forced to close for six weeks during the shutdown, but when the doors were reopened, they seemed more like floodgates. People were coming to Sidney from all over the area to get tattooed by Sult, being referred by friends, family, coworkers, or simply liking what they saw on the Facebook page.

It was clear a bigger location and a second artist needed, though the former would come before the latter. In May 2021 local artist Sami Couture joined the Temple Tattoo family apprenticing under Sult.

"I was ready to take my art career to the next level, so when I came in to get tattooed and Darren offered me the apprenticeship, I knew I had to try," Couture commented. "I was feeling lost in what I should do with my art and had always wanted to tattoo. It was a perfect opportunity at the perfect time."

With two artists and a piercer sharing one work space, scheduling became like a juggling act until Sult found the perfect place at their new location in the back portion of the Siegfried Building. One of the most challenging obstacles of finding a new place to rent was the lack of interest in renting to a tattoo shop. However, the current landlords were excited about a ten-year established business moving into the space, which was the first best sign. 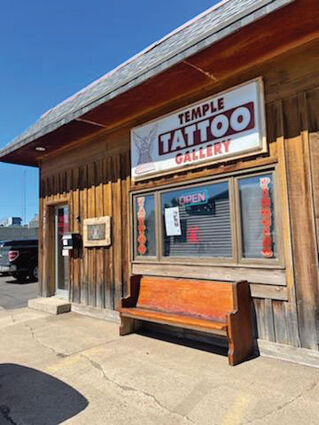 The move was fast and furious and so is business with everyone having their own workspace. Most walk-in piercings can be accommodated as well as in-shop spray tanning by appointment; Couture is steadily booking appointments and building her clientele and Sult is scheduling into November.

Even dorkie (dachshund-yorkie) Dexter who doubles as their 8 lb. security system has settled into his new home-away-from-home.

The trio credit their families, shop family, and loyal clientele along with the support of the community with their success. The longevity of their success, however, is due to their hard work and stick-to-itiveness.

Temple Tattoo Gallery can be reached at 406-433-8204 or via their Facebook page. For what started out as 'The Best Little Tattoo Shop You've Never Heard Of' being here to stay seems pretty loud and clear now.