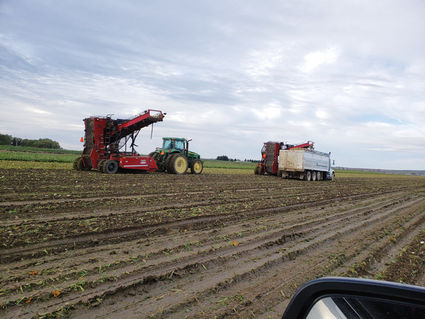 Digging beets on the Buxbaum farm.

After being delayed a couple of weeks due to excess moisture, sugar beet harvest started in the afternoon of Monday, October 7 at the Scott Buxbaum farm north of Fairview. As both a grower and president of the Montana Dakota Beet Growers Association, Buxbaum talked about the harvest and negotiations with Sidney Sugars during a short break from digging last Wednesday morning.

Harvest has been sporadic with a couple of days of digging, followed by a shutdown caused by slippery conditions at the pile grounds, and then frost. "The rain Wednesday, October 9 wasn't enough to stop us from digging but safety issues at the pile grounds caused the shut down. That was necessary, Sidney Sugars and the growers want everyone to be safe," Buxbaum said. The Sugar Valley station had extremely muddy grounds to begin harvest, with fewer pilers than usual, also causing a bit of delay for growers.

Growers were able to go full speed again on the 15th. Most of the beets have healed from the frost but sugar content has probably been affected. "Normally, the sugar content increases every day of harvest," Buxbaum explained. "The frost may have either set the beets so the sugar won't increase or it could have killed some beets which would mean a decrease in sugar if the beet tries to grow new tops."

Fears of a muddy, ugly harvest have largely been unfounded. "We were pleasantly surprised when we got into the fields. It was drier than most people thought it would be. The beets kept growing and absorbed a lot of the excess moisture. The region was fortunate to escape the big snow storms to the west and east," he added.

Buxbaum estimated tonnage of 34 to 34.5 with sugar at 16.9 to 17 on his farm. "It's not the best but all the moisture diluted the sugar content. However, we're seeing a tonnage gain compared to the root sample estimates, because of all the rain, so that's good." As of Wednesday morning, Buxbaums were about 20% complete, which he said was not too bad for running just a few days.

One of the truck drivers I met as I was heading into the beet field was Julio, an exchange visitor from Brazil. He and Zoltan, from Hungary, have been part of the Buxbaum farm since mid-March. "They have been excellent," Buxbaum commented. "They have done pretty much everything." The two men will go their respective ways mid-November, taking the experiences and knowledge they have gained back to their native countries.

With negotiations to buy the factory dead, the MonDak beet growers are in year one of a three year contract during which they took a cut in price per ton. "It's too early to tell what will happen next time. We took a huge cut this time. We wouldn't be able to survive another cut. We have to hope that we can get a better contract or, at a minimum, stay the same," Buxbaum stated.

Commenting on this season, Buxbaum said that it's been a tough year for everyone. Dryland farmers are still combining what had promised to be a record crop. Flooding in the Fairview area made planting late for some growers. Storms wreaked havoc in some regions. Hay is still being put up. "There are issues harvesting any kind of crop and lots of worry. But we'll get the beets. The forecast looks promising, we'll get the crop out. We've had a lot of bad but we're fortunate that we're not looking at what Powell is facing with the snow and cold they've had."