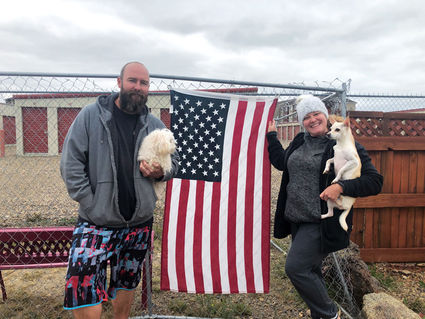 Everybody has a job in mind when they think of what they would love to be doing. For Dave and April Hunt, the beet harvest is one job they love.

After their kids were grown, the couple downsized, got an RV and became full time "RV'ers."

The couple said they take jobs here and there while on the road and just try to live life to the fullest and as positively as possible.

Like so many others, during their stay in Sidney the couple has taken up camp at Bagnell RV Park.

"We absolutely love it here, we love the park, we love Kandi (Davis) and she gives us the VIP treatment."

One of the things the Hunts enjoy the most is the freedom they have.

"We work the season and then we can take five months off and visit our kids and our grandkids," April said.

They have worked during the sugar beet harvest season for the last three years and have grown to greatly enjoy the experience.

Dave works as a foreman, while April works as a piler. They said there are a lot of couples that work the campaign and the singles "fill in the blanks."

Another beet harvester, John Erhart said this is also his third year working the campaign. He got started working the harvest after a friend told him about it.

"The best part is coming up and being around good people," Erhart said.

He and his wife are originally from Wyoming, but travel to surrounding states working job such as the harvest and oil field work.

At the time of this interview it had been too rainy and wet for them to start harvesting, but one thing the harvesters agree on is that it's a waiting game.

"The fields are like lakes right now," Erhart said.

While we've had an unusually wet season, it's been quite the setback for the farmers and harvesters.

"You just have to come out here with a positive attitude," April said.

There may be some downsides such as the extreme weather and having to wait for the right time to get started, but April pointed out that the benefits far outweigh any negatives.

She went on to explain they are provided clothing, hats, gloves, safety gear and anything else that they might need.

"They really take care of us," April said.

When asked what he felt was the best part of the job, Dave said the overall experience.

"Being able to meet new people, coming back and seeing the same people. Coming back up to the park (Bagnell) and having things like crock pot parties. There are a lot of good people out there." Dave said.

Dave and April said they are typically scheduled to work 12-hour days, working from 7 a.m. till 7 p.m.

They talked about the importance of leaving on good terms. "If you leave with the door open, the door will be open when you come back," April said. "You have to work for it and care about it."

Bagnell RV Park has had a contract for years with the company to host the harvesters.

She said the community has always been so great toward the harvesters, with business owners bringing flyers, business cards and menus to the park for the harvesters.

"They really like MT Bare Cave and Sidney Mercantile. Mucho Si has been doing to-go orders for them; other places have been giving drink coupons. They also really like 1035, they think it's so cool that it used to be a video store," Davis said.

Overall, Davis said hosting the harvesters has always been enjoyable. They all come together for meals, spend time together hanging out and over the years have become one big family.