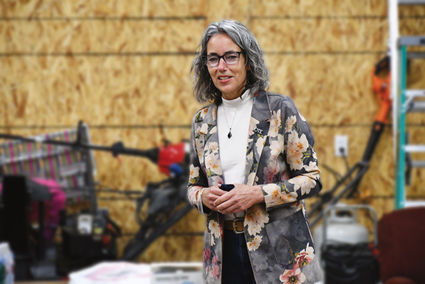 Democratic candidate for Montana's US House of Representatives Kathleen Williams visited Sidney Oct. 2. Williams spoke to supporters at Greg Miller's shop near Miller's Corner. She will face serving Montana State Auditor and Commissioner of Securities and Insurance, Matt Rosendale in the Nov. 3 election.

Williams spoke about her background and her history serving in the nonpartisan Environmental Quality Council of the Montana Legislature and the Montana Department of Fish, Wildlife and Parks. Williams stressed her bipartisan work working with Montana's water sources where she helped bring people together for things that are of vital importance to many Montanan's: irrigation, city's water supplies and water rights.

Williams stated that congress is broken and her experience of three terms in the MT State Legislature will be important for representing Montana in Washington. "I work with people of all stripes. A true independent voice for Montanans," she said.

Williams has three main issues she plans to tackle if elected. The first is a fix for health care. The second is fostering opportunity for all Montanans to get a fair shot at the American dream. Her third major issue to address is protecting Montana's outdoor heritage and protecting public lands.

Williams stated her contrasts with her opponent, Matt Rosendale. She plans to be a champion for healthcare, stating that Rosendale allowed for a 23% increase on insurance premiums on Montanans. She continued by stating that she is in favor of the Medicaid expansion and supporting rural healthcare. She also wants to preserve the ACA's protections on preexisting conditions, prescription drug prices for those on Medicare and keeping Montanans on their parent's insurance until they turn 25. Williams also opposes junk insurance plans that Rosendale has supported in the past.

On more local issues, Williams asked about supporting the Lower Yellowstone Irrigation Project as it moves forward with building a new weir and diversion channel. "I always talk about traveling around the state you really don't know about the intake diversion until you go to Sidney. So we need to solve it and I look forward to doing that in congress."

Williams was then asked if she would stand up to environmental groups especially with all the studies and science behind the benefits of the new project for the pallid sturgeon. "We want farmers to farm, pallid sturgeon to make it up the river to spawn and we need the community to not be torn apart by the issues," she stated.

The final question posed to Williams was her stance on nationwide ban on fracking. "There are a lot of people worried about their water supply and I need to learn more about it," she said. Williams is interested in finding out how to protectthe water supply and also support the energy industry. She went on to say that she is not in favor of a blanket ban on fracking for everywhere, despite the differences in geology through out the county. "You can tell I'm a real wonk. I don't do blanket on anything. I want to hear from the specialists. I want to make sure we do not have a one size fits all policy. If the water supplies are safe, great," said Williams.