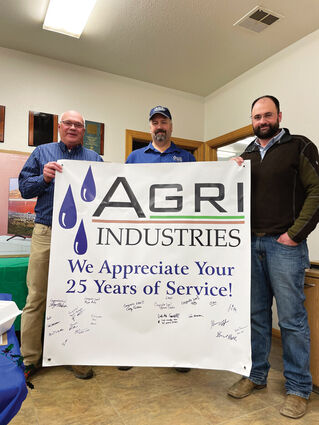 Agri Industries honored Lee Candee, for 25 years of service during an employee luncheon at their Sidney location on Dec. 18.

Candee started his career with Agri Industries as an intern between his junior year and senior year at Montana State University. In 1996, after graduation, he went to work full time for Agri Industries in Williston, ND. A year later, Candee went to Miles City, MT where he opened a new location. After two years in Miles City, Candee persuaded owner Mike Ames to open another location in Sidney.

"Lee is a hard working guy, willing to do anything," stated Ames. "Just look around and see the results of what he has done."

During Candee's tenure, the company has added well drilling, HVAC, plumbing and electrical services to their irrigation and pivot business. "Diversity makes this all sustainable," said Ames. "None of it would be possible without Lee."

Candee was humble when receiving the 25-year honor. Speaking to the staff he stated, "This success is because of all of you guys. Thank you, Mike, for giving me a shot and letting me make my own mistakes."

Candee was awarded a banner signed by his fellow employees, a plaque, a commemorative pin and massage chair.