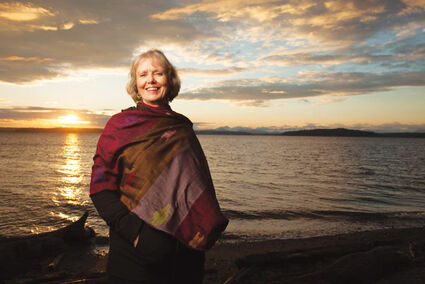 "Beyond the Next Village: A Year of Magic and Medicine in Nepal" is Mary Anne Mercer's memoir of discovery, growth and awakening in 1978 Nepal, which was then a mysterious country to most of the world.

Mercer was raised on a farm and ranch south of Sidney in the small but close community of a dozen or so families known as Gossett. She attended Sidney High School, and after graduation studied with a nursing major at a small women's college in Minnesota affiliated with the Mayo Clinic. The family ranch is operated today by her brother, John.

After training and working for several years as a nurse practitioner, she traveled to Nepal as a volunteer with a nonprofit organization. There she spent a year trekking on foot (often in flip-flops) with a Nepali health team, providing immunizations and clinical care in the villages. Communicating in a newly acquired language, she was often called upon to provide the only modern medicine available to the people she and her team were serving. Over time, she learned to recognize and respect the prominence of their cultural beliefs about health and illness. Encounters with life-threatening conditions such as severe malnutrition and ectopic pregnancy gave her an enlightening view of both the limitations and power of modern health care; immersed in villagers' lives and those on her own team, she realized she was living in not just in another country, but another time.

As time went on I saw more and more similarities of this culture with my own upbringing. I saw the older women worship faithfully every morning at their Hindu shrines-so much like my own mother, who prayed devotedly to a Catholic God. Over time my affection for the Nepali staff I worked with grew to the point that I thought of them as family, some of them close family."

The unique story of the joys and perils of her journey in the shadow of the Himalayas, "Beyond the Next Village" opens a window into the world where the spirits were as real as the trees, the birds or the rain-and healing could be as much magic as medicine.

Mercer's book can be purchased from any bookseller, including Amazon, with links on the web site at maryannemercer.com. She will also be in Sidney for her class reunion this summer.