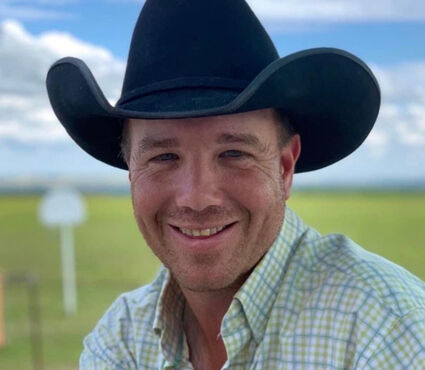 Funeral services for Jeffrey Dale "Jeff" Severson, 43, Cartwright, ND were held at 3:30 p.m. MDT, Friday, July 8, 2022, at Squaw Gap Hall, Squaw Gap, ND with Pastor Tim Tharp officiating. Interment was in Sunnyside Cemetery, Squaw Gap, ND, under the care of the Fulkerson-Stevenson Funeral Home, Sidney, MT. Visitation was 10 a.m.-5 p.m. MDT, Thursday, July 7, 2022, at the funeral home and one hour before services at the hall. In lieu of flowers donations may be made to Jeff's son's accounts at Yellowstone Bank or Nick Lonski, c/o of Edward D. Jones. Remembrances, condolences, and pictures may be shared with the family at http://www.fulkersons.com.

Jeffrey Dale Severson made a rushed entrance into this world on March 27, 1979, to Curt and Nancy (Greenwood) Severson in Williston, ND. Jeff lived every day with the same grand production with which he came into the world.

Jeff attended one of the few one room schoolhouses left in North Dakota, Horse Creek School through eighth grade. He was very proud to have been a part of this fading legacy of country life. Family stretched far beyond blood ties to Jeff starting at a young age. His lifelong friends and he enjoyed 4-H and their own coordinated rodeo play days, eventually deemed the GRS Kids Rodeo by those that participated, which was usually just the Greenwood, Rindahl and Severson families. As Jeff entered high school, he was an excellent athlete participating in football and wrestling, during which time he was able to capture a Montana State Wrestling Championship title in 1996. Jeff graduated from Sidney High School, Sidney, MT in 1997.

Following high school Jeff was a member of the NDRA and Rough Rider rodeo circuits as a bull rider. A jaw injury caused by a horn ended his self-proclaimed illustrious career sooner than expected and left him with bragging rights and a cool scar. Jeff also worked for the McKenzie County Weed Board for two summers with his older brother, where their antics often pushed the limits under Terri Rindahl, a second mom to the boys, luckily for them. Those that knew Jeff would also note Jeff's fear of birds stemming from a young age and his experience with poultry on the ranch. Jeff wouldn't shy from a snake, spider, predator, or any variety of monsters, but a bird dead or alive would send him into hysterics, but in the bravest way possible.

After Jeff's early endeavors, his most notable attributes and contributions began to surface. Jeff has been a long-standing member of the Horse Creek School Board as well as an AAU Wrestling coach once his son Shay began to participate. He served as a member of the McKenzie County Grazing Association. Being a 4-H Leader in his sons' local group also set Jeff aside from most as not only a one-of-a-kind dad, but a man dedicated to the community and his sons.

Jeff was also an outdoorsman. He loved to snowmobile. A marksman with a rifle bought him bragging rights regularly, but most recently on a prized team last August. His team, the Prairie Turtles, will always consider Jeff the VIP of the Wild West Olympics. Henry the Big Horn Sheep was a prized trophy of Jeff's as well. After receiving a once in a lifetime draw, one in four to be exact, Jeff set out with Grandpa Gene and his father Curt to fill his tag in the North Dakota Badlands. Henry symbolized much more than a drawn tag to Jeff. He symbolized the memories and time spent with his dad and grandpa.

Jeff was always willing to show up and help anyone anytime, anywhere. He put true thought into every gift he gave. He loved his friends and family with his whole heart. Along with his many attributes, he had his own version of high fashion which not all agreed with, but he stuck to his unbuttoned button-down and gold chain. No one could argue, however, that Jeff was always dressed to the nine. His love of his family history and he researched his grandfather's rodeo accomplishments that he proudly displayed in his home. Jeff was able to tell family history for hours and loved to research area history as well.

Raised on the family ranch he followed his beloved Grandpa Dale's footsteps and worked the ranch side by side with his family. Ranching was his life and there was no other place he would have rather hung his hat. According to Jeff, it was "his church." It was important to him to raise his sons with the same values and ranching lifestyle with which he was raised. It was no secret that Shay and Jaden were his biggest accomplishments and his entire world. He was proud of the hands and young cowboys they are becoming and never hesitated to share the boys' latest accomplishments.

Jeff passed away on Friday evening, July 1, 2022, at Sidney Health Center ER, Sidney, MT, of injuries from a motorcycle accident.

He was preceded in death by his grandparents, Dale and Marilyn Greenwood and Gene and Alice Severson.