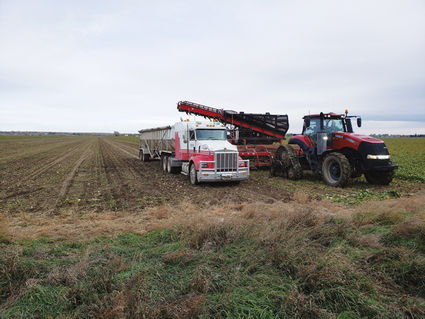 As of Friday, October 18, Sidney Sugars agricultural manager Duane Peters estimated beet harvest at a third complete with some growers at 10% and others at 50%. The biggest factor in the disparity is the type of soil with the heavier ground retaining more moisture. "We've made good strides this week," Peters said.

Frost shut down harvest Sunday and Monday to let the beets heal before heading into storage. With no damaged beets, the piles will hold in the long term and beets will process well.

Yield is better than earlier estimates with tonnage at 32 to 32.5. "We're half a month behind so we're still seeing growth as the beets use the extra moisture," Peters explained. The earlier moisture caused diluted sugar. However, those numbers have come up to 17 as of Thursday night. "That's a good sign. We feared that the frost might have set the sugar, but we like what things are looking like right now," Peters said.

Processing started October 11 and there are plenty of beets on the ground to continue running through campaign.

The big concern, as always, is the weather and whether those beets will store properly. Peters gave a huge thank you to American Crystal's storage specialist who has provided good guidance this fall. Sidney Sugars is hoping for a cool fall to allow the beets to cool gradually before freezing.

Help is also a major concern for growers and Sidney Sugars as harvest help is usually retained for the normal couple of weeks. Delays this year have meant some of those workers have had to go back to regular jobs. Peters credited Express Employment, which brings in the RVers, for maintaining that labor pool. "It's been a slow harvest but they've stuck with us and their efforts are greatly appreciated. They say they'll stick with us to the end," Peters commented. 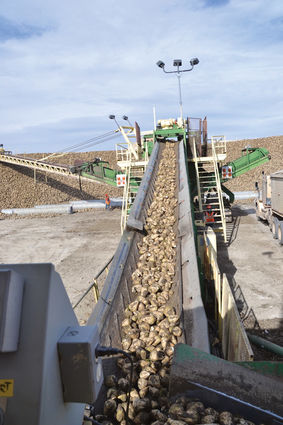 It's been a rough year for farming altogether but Peters said the growers are doing a good job getting rid of the mud and bringing in clean beets. Growers have had exceptional challenges this past three years with unusual weather and road construction including the roundabout in Fairview, the construction of 200 between Sidney and Fairview, and Holly this year. "It's not fun, always having to find alternate routes to get the product to the pilers or the factory," Peters stated. "There's challenges at all times and we appreciate their perseverance," Peters said of the growers.

Peters also praised his ag staff for putting in long hours and dealing with this unusual harvest. Summer Reidle handles Sugar Valley, James Johnson takes care of the south district, while Peters has Culbertson and the factory. "They take their job very seriously, helping the growers get the best quality beets we can get, which helps with long term storage and ultimately, the top quality sugar that gets produced here.

Peters reminds everyone to stay safe and watch for beet trucks and harvest equipment on the roads.