By Memories of Lola Norgaard Hansen 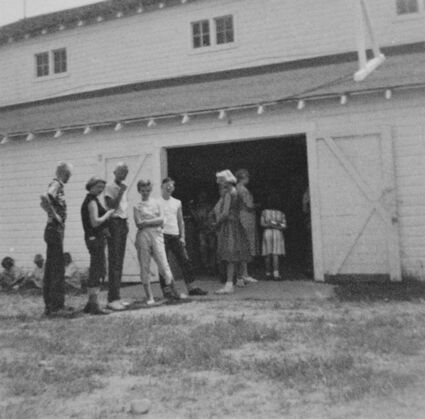 One of the many Farmers Union camps held at the fairgrounds for local youth in 1956. They had day camps for younger kids and overnight for 3 days and nights. (Photo submitted)

As a kid, my first memories of the Richland County Fair started in the dining room where I grew up 8 miles west of Sidney. From early in the summer, the dining room table stayed occupied by the big seed picture being worked on by the Mount Pleasant Homemakers Club. This was followed by a flurry just before the fair when sheaves of grain were arranged just perfectly, plates of tomatoes and parsnips, bouquets of flowers, canned pickles and freshly baked bread were all being prepared for competition.

My Grandpa, R. P. Blair, (Insert his photo) served on the Fair Board for 20+ years so we had extra incentive to support it in every manner possible. Did not hurt at all that the fair board members got a few Midway tickets as perks and grandpa would give us a few although I never thought enough. He was recognized in 1954 for his 20 years of service, some of which were as President, and the news story at the time mentioned that he had homesteaded there in 1906 and gave back to the community by his participation on several boards and as a state Senator. The 1954 Fair board that attended the Rocky Mountain Association of Fairs included Blair, Dwight Howard, W. A. "Babe" Turner, Vernon King, Bud Starr and Senator Don Nutter as secretary-manager.

Growing up, my sisters, Rita and Jeanette, and I got another extra treat of the fairgrounds as campers at the Farmers' Union camp held there. It was held over 3 days and cots were set up in the ag building with most of the activities, singing, dancing, crafts in the commercial building. The bathrooms were the most challenging part of camp and us campers had to keep them clean as KP duty. (Insert camp picture).

Taking a ride on the Ferris wheel to catch sight of the boy you hoped was at the fair was best done with cotton candy along. I know many a first kiss occurred on the Ferris wheel and my sister remembers hers happened during camp. I'm leaving out the who to protect the 'innocent.'

Two summers while in Middle School, my parents, Orvald & Hazel Norgaard, took on the responsibility of managing the FU food booth (where the Pella booth is now) and I spent 12-hour days cooking burgers and assembling roast beef dinners. It is amazing I opened the South 40 restaurant years later after that experience. Norgaard Motors, Dad's Volkswagen dealership used puppies from our dog Trixie as the fair booth prize and the 3 of us girls had mixed feelings about taking those registrations.

I remember being so excited to see a vice presidential candidate at the fairgrounds when Senator Kefauver came to Sidney. I was old enough that I rode with school kids via bus to the big event but sister Rita rode with Mom and Dad and for some reason they went home without her. A story retold many times through the years.

In the '60s after returning to Sidney from college I bullied my school teacher husband, Arnie to load refrigerators, stoves, and big lawn mowers to my Montgomery Ward booth at the commercial building and I spent a 12-hour day registering people for door prizes and genuinely enjoyed being able to visit with so many people. Arnie hoped that I didn't actually sell any of those samples, so he didn't have to replace them.

In the '70s, as a Chamber director, I chaired the Bicentennial celebration that used much of the fairgrounds for their events. Arnie had his 10th class reunion picnic there. His classmate, Sandy Peterson, was long time Fair Manager, Dolf Bosshard's daughter.

Charlie Evanson, director of the MonDak Museum, provided me with historical photos of Sidney for our dining room walls which included the 1916 animal parade in front of the livery barn formerly in the South 40 location. (Insert picture)

In the '80s Chairman of the Republican Party, Ben Nordell and myself visited the Fair Board and asked if they would once again allow political parties to have their booth and candidates to campaign. I am happy to see this is still allowed and seems to remain a friendly competition among neighbors of a different political persuasion. 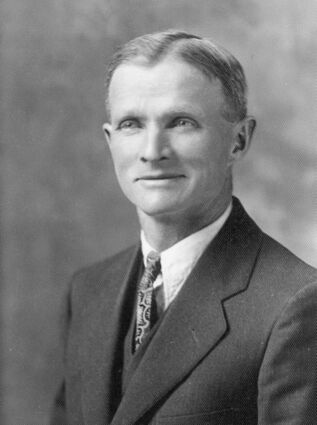 In the '90s I was back at the fair blowing up balloons and selling raffle tickets at the Richland County Tavern Association's booth.

After 2009, I spent many spring evenings watching grandchildren, Cody, Jace, and Liliana on the soccer fields using fairgrounds grass. I thought it was inspirational that this was created, and hundreds of kids have enjoyed this space.

Most recently it's an occasional wedding or celebration of life that I have attended in their impressive Event Center which works wonderfully for so many great events. Arnie and I even managed one Cattleman's Ball.

Sadly, I won't be attending again this year, but Heather will video my granddaughter, Lilliana Johnson, singing the National Anthem at the Friday night rodeo (pink night), and I'm hoping Arnie will bring me a piece of rhubarb pie.

Great story, Lola! I remember the little Red Schoolhouse where samples of handwriting and other school projects were displayed. I always wanted to have my cursive writing there, but it wasn't good enough. Used to ride our bikes to the fairgrounds to watch them put up the rides. I did little chores for my grandma to save up money to spend at the fair. Good times!